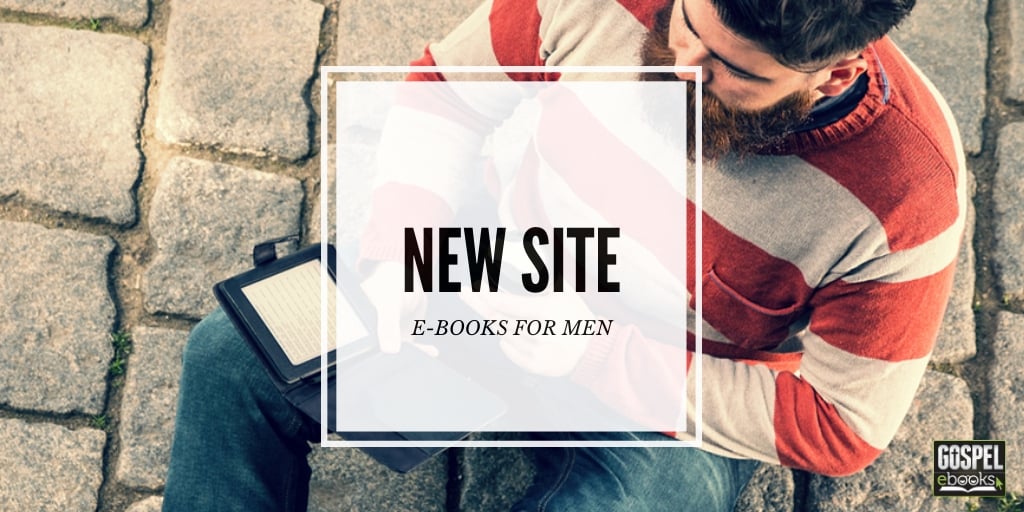 I wanted to let you all know that I’ve just launched a second e-book deals site called E-Books For Men. We’ve already soft-launched on Twitter (daily deals have been happening for just over a month) and the full website launch is planned for this summer. If you’d like to be notified when that happens you can do so on this page.

The mission on the site is to provide alerts for free & discounted e-books so that men can read broadly without breaking the bank.

There are three things you should know about E-Books for Men. Let me tell you them in short form and then I’ll explain a little more of my reasoning after.

There are two general philosophies towards how a website chooses which e-book deals to post. The first philosophy is akin to “book recommending,” which is where a person makes discernment calls for you and only recommends books they deem as safe or helpful. Lots of bloggers employ this philosophy and there is benefit in doing so (especially when your audience is less mature or discerning).

The second philosophy is not recommending but “informing.” This is simply telling your audience what’s available and leaving the discernment to the reader. In that case, you have the philosophy that all truth is God’s truth and even in a book with substantial error, benefit can usually be gleaned from it (eating the meat and spitting out the bones). You also recognize that not everyone reads for the same purposes. Some people need to read broadly for school or research purposes and others like hearing from opposing views in their own words.  This second philosophy is the one that we operate under.

So, E-Books for Men will be posting general market books, including ones I personally disagree with (some even substantially). I read many of these books myself and have benefitted from them. I use my own discernment and take the truth within them while rejecting the errors according to my biblically informed worldview. If you choose to follow the site, I hope you too will do the same.

This brings me to the ministry component. Gospel eBooks is a website for Christians by a Christian. However, I also want to reach out and have an influence to non-Christians as well. I know there are many great Christian books out there that non-Christian guys might be interested in. Through the influence of men like Jordan Peterson, Ben Shapiro, Steven Crowder and others, men at this particular time are thinking and talking about religion a lot more lately. Recognizing this opportunity, I want to step into that sphere as a Christian, and help introduce these men pursuing knowledge to good Christian books.

Often times in an election, people say they don’t vote because their vote won’t make a difference. In our weekly Gospel eBooks poll, this is clearly not the case. One vote often is the difference between a deal becoming active (that wouldn’t have) or a different book winning. We’d like to show you a few recent examples to show you how much your vote truly matters as an encouragement for you to place your vote every Thursday in our new poll.

First, for those aren’t aware, every Thursday we have 12 books for you to choose from by six different publishers. As long as a poll receives 100 votes in a week’s time, the winning book of that poll gets discounted to $2.99 for 48 hours. If it doesn’t reach 100 votes, there is no discount from that publisher.

In these two examples, these two pairings were just shy of 100 votes. 8 extra people on the first one and just 5 extra people on the second one would have created a discount that didn’t happen because there weren’t enough votes. In fact, we had one book this year that received 99 votes. EVERY VOTE REALLY MATTERS!

On top of that, some receive over a 100 votes but many times just one or more votes would change which book gets discounted.

For these two polls, both of which took place within the last two months, only a few votes would have changed which book gets discounted. On the second example, one vote was the difference maker and two additional votes could have made a CS Lewis biography (Jack) get discounted instead.

So we wanted to highlight this to encourage you that your vote really does matter. Every Thursday we will post a brand new set of 6 pairings, and we wanted to ask if you would please make voting weekly on the poll a part of your regular routine. This will ensure this amazing program continues, which puts you in charge and gives you even more discounted e-books.

Why You Should Vote in Our Weekly Poll (And How This Leads To More eBook Discounts)
https://gospelebooks.net/blog/vote-weekly-poll-leads-ebook-discounts.html

Hello everybody, today we’d like to introduce you to our first set of video tutorials. The purpose of these videos are to help you use this site and your Kindle better. After you watch these videos, we want to hear from you below in the comments section. Let us know what questions you’d like for us to cover next.

Tutorial #1: How Do I Give A Kindle Book As A Gift?


Tutorial #2: How do I Return a Kindle e-book for a Refund?


Tutorial #3: Why Do I Not See the Sale Price on Amazon.com for Kindle Books?

Today we celebrate our 4th birthday! On Oct 19, 2010 we launched as the Twitter account @freeonkindle. A few months later we expanded to a full website under the name Gospel eBooks. With each year that goes by, the site continues to grow and for that, we are grateful. We want to thank you for making Gospel eBooks your go-to place for free & discounted Christian e-books. We’re in it for the long haul!

OUR GIFT TO YOU

On our fourth birthday we’d like to give away four e-books to four different people. To enter just leave a comment below with the following info: 1) let us know what e-book you’d like to read next ($10 or less) and 2) why you want to read it. We’ll hand-pick one male and one female winner and then the other two will be randomly selected. Winners will receive the Kindle version of the book they mentioned. The entry deadline is tomorrow night (Monday) at 11:59PM (MST).

YOUR GIFT TO US?

If you’d like to give us a present on our birthday, there’s a few simple non-monetary ways you could bless us. The first is, we’d really appreciate it if you’d like and follow us. The second is we’d appreciate it if you’d tell someone about us (through social media, your blog, joining the street team etc.). These would be awesome presents to us. A sincere thank you if you do!

Amazon has just announced the all-new Kindle family. See the image below for a run-down of each device.

Here are the links to each product page where you can learn more about each device as well as pre-order them: 1) Fire HD 2) Fire HD (Kids) 3) Fire HDX 8.9 4) Kindle 5) Kindle Voyage

As announced on the Hangout, we’re going to be giving away a three month Audible.com gift membership to one winner who shares the Hangout video. Please leave a comment below stating where you shared it and that will be your entry into the giveaway. The winner will be selected randomly tomorrow morning.

You can share it by using this URL: https://www.youtube.com/watch?v=7-RzTgNgoUw

Thanks to everyone who joined us live!

If you won one of the live prizes please contact us here. All other winners will be revealed tomorrow morning.

The event is now over but you can still see the comments / questions / interactions on the official event page.

If you won one of these prizes or one of the live prizes from the chat please contact us with your info so your prize can be delivered to you.

Page 1 of 712345...»Last »
Gospel eBooks is a participant in the Amazon Services LLC Associates Program, an affiliate advertising program designed to provide a means for sites to earn advertising fees by advertising and linking to amazon.com. View our Privacy Policy.