Black & Tan: Essays and Excursions on Slavery, Culture War, and Scripture in America 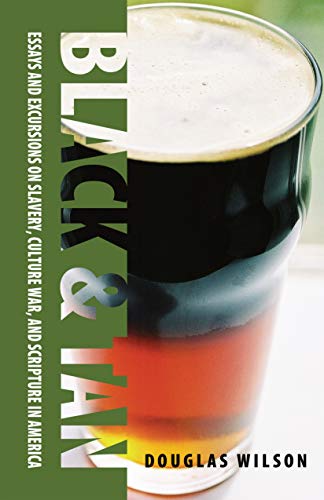 Even though America is fiercely divided between the left and the right and protests are becoming increasingly violent, both sides of the political aisle remain committed to secularism and increasingly to looser standards of sexual propriety.

If we want to understand contemporary American culture wars, we must first come to grips with the culture wars of the nineteenth century. In this book, Douglas Wilson explains how our nation’s failure to remove slavery in a biblical fashion has led us to many of the quagmires we find ourselves in and until we grapple with issues like racism, hate speech, and the biblical position on slavery, we will continue to repeat the same mistakes our ancestors did.

This collection of essays lays out the answers from a view unafraid of historic, biblical orthodoxy, as well as addressing some of the controversies surrounding the previous edition of the book. In the Garden of Eden, there was only one “No.” Everything else was “Yes.”

In this short book on childrearing, Douglas Wilson points out that we have a Father who delights in us and makes it easy for us to love and obey him. If that is the kind of Father we have, shouldn’t we earthly parents do the same? Wilson explains how parents should not just try to get their kids to obey a set of rules or to make their house so fun that following the rules is always easy. Instead, he calls for parents to instill in their kids a love for God and His standards that will serve them well all their days.

This book also features an appendix in which Doug and his wife Nancy answer various parents’ questions about various applications of the principles discussed in this book.

God Rest Ye Merry: Why Christmas is the Foundation for Everything The repetition of Christmas traditions can appear to dull the powerful nature of the holiday. This short book is meant to rekindle the Christian’s understanding of Advent on every front, from politics to shopping to uproarious celebration. Pastor Douglas Wilson critiques false reasons for the season (and false objections to it), teaches the importance of Israel in Christmastime history, explains why nativity sets should have Herod’s soldiers (and how Santa Claus once punched a man in the face at a church council), offers the Enlightenment Assumptions Detector test as a guide to understanding Christmas symbolism, and much more. The last section is an all-new Advent reader: it contains a read-aloud meditation and prayer for each day of Advent, making God Rest Ye Merry an excellent tool for cultivating a deep family love of Christmas.

God Rest Ye Merry: Why Christmas is the Foundation for Everything
https://gospelebooks.net/removed/god-rest-ye-merry-christmas-foundation-everything.html Readers of PG Wodehouse’s Leave It to Psmith and Christopher Buckley’s Thank You for Smoking will appreciate this lighthearted new satirical novel from the award-winning author of Evangellyfish (Best Fiction of 2012, Christianity Today).

Tom Collins, mild-mannered president of a dwindling southern Bible college, becomes a target when a drunk prankster swaps his campus’s American flag with the Christian one, and Dr. Tom refuses to “fix” the situation. Big media, exuberant students, petty enemies, and pretty secretaries all play a part in this happy-go-lucky satire for the twenty-first century.

“Well, this is it. Caesar had his Rubicon. What do Bible college presidents have? A Rubik’s Cube?” ~ Flags Out Front: A Contrarian’s Daydream As it self-destructs, the strategy of secularism (the idea that nations can be religiously neutral) is splitting between American exceptionalism and radical Islam. American exceptionalism, the belief that “America” is more than a nation, is folly. Radical Islam is obviously wrong as well, but Muslims at least own the nature of the current cultural conflict: You must follow somebody, whether it’s Allah, the State, or Jesus Christ. This important and timely book is an analysis of the changing face of religion and politics and also an extended argument for Christian expression of faith in Jesus Christ. This does not mean a withdrawal from politics to our own communities and churches. Instead, we Christians must take what we have learned from the wreck of secularism and build a Christendom of the New Foundation: A network of nations bound together by a formal, public, civic acknowledgment of the lordship of Jesus Christ and the fundamental truth of the Apostles’ Creed.

And you could have it all, My empire of dirt… ~ Nine Inch Nails; Johnny Cash

“My name is Ozymandias, king of kings;
Look on my Works, ye Mighty, and despair!”
Nothing beside remains. Round the decay
Of that colossal Wreck, boundless and bare
The lone and level sands stretch far away.
~ Percy Bysshe Shelley

Behold, the nations are as a drop of a bucket,
And are counted as the small dust of the balance:
Behold, he taketh up the isles as a very little thing.
~ The prophet Isaiah As much as it may distress us, our boys are future men. When Theodore Roosevelt taught Sunday school for a time, a boy showed up one Sunday with a black eye. He admitted he had been fighting and on a Sunday too. He told the future president that a bigger boy had been pinching his sister, and so he fought him. TR told him that he had done perfectly right and gave him a dollar. The stodgy vestrymen thought this was a bit much, and so they let their exuberant Sunday school teacher go. What a loss.

As we look to Scripture for patters of masculinity for our sons, we find them manifested perfectly in the life of the Lord Jesus Christ. He is the one who set the ultimate pattern for friendship, for courage, for faithfulness, and integrity.

A Primer on Worship and Reformation: Recovering the High Church Puritan It is no secret that our world desperately needs change. Politicians know this and use it to collect votes. Journalists exploit it to sell newspapers and magazines. Advertisers, to sell everything else. Each of these groups (and countless others) spend their lives working to convince others that they hold the key to a better country, a better life, a better future.But what exactly is this change we all long for? And how can it ever come about?

A Primer on Worship and Reformation proposes that true change begins, not with a process or an idea, but through faithful worship. To witness true global change—true reformation—we must first pray the Lord that we would see worship at the center of life. The truth is that when the Word is faithfully preached, even the gates of hell tremble. When the Psalms are sung, the meek inherit the earth. When the church celebrates at the Lord’s Table, those who mourn are comforted.

If we learn these lessons and believe them to be true, we will find that through renewed worship God brings change to every facet of our lives.

A Primer on Worship and Reformation: Recovering the High Church Puritan
https://gospelebooks.net/removed/primer-worship-reformation-recovering-high-church-puritan.html

Page 2 of 4«1234»
Gospel eBooks is a participant in the Amazon Services LLC Associates Program, an affiliate advertising program designed to provide a means for sites to earn advertising fees by advertising and linking to amazon.com. View our Privacy Policy.