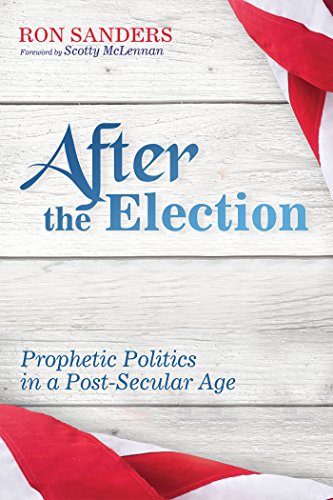 “Ron Sanders’, After the Election, is an extraordinary book, filled with sound analysis, charitable engagement, and wisdom . . . Religious discourse needs the pressure of the democratic concern for every citizen, and our democratic processes need the ‘thicker’ ethics that religious life provides. This book is the place to start in order to think well about religion and politics.”
–Gregory E. Ganssle, Professor of Philosophy, Talbot School of Theology, Biola University

“After the Election is a timely and wise book that reminds us why we need both democracy and Christianity rather than choose one over against the other, for the wellbeing of the republic. I strongly recommend this book to those who care about the future of democracy and the credibility of Christianity in the United States.”
–Hak Joon Lee, Professor of Christian Ethics, Fuller Theological Seminary

“I saw the beginnings of this masterful work by Sanders years ago, as it was in its nascent stages. The fact that it speaks to our contemporary situation with keen insight and academic rigor is a testament to the author’s brilliance . . .This text is a timely engagement with political philosophy, and theological ethics that is robust enough for graduate students, but written in such a way that it is accessible to a broad audience of lifelong learners.”
— Reggie L. Williams, Associate Professor of Christian Ethics, McCormick Theological Seminary

Ron Sanders is an Affiliate Faculty in Christian Ethics at Fuller Theological Seminary. His research is focused on the intersection of Christianity and American public policy. He teaches courses on Christian ethics, faith and politics, and biblical and practical peacemaking. He has also served as a campus minister at Stanford University for seventeen years, where he has been an active member of the religious life on campus.

After the ElectionCascade BooksNon FictionPoliticsProphetic Politics in a Post-Secular AgeRon Sanders
Gospel eBooks is a participant in the Amazon Services LLC Associates Program, an affiliate advertising program designed to provide a means for sites to earn advertising fees by advertising and linking to amazon.com. View our Privacy Policy.