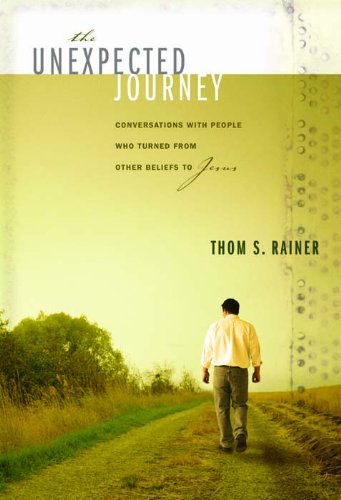 Following Jesus is a journey none of the people in this book ever expected to take. Why did they?What difference did it make?The book you’re holding is dangerous. If you read it, you’ll see that God is still active in saving even the most unexpected people: An atheist woman who viewed Christians as “idiots.” A married couple high in the leadership ranks of the Mormon church. An African-American man who became a Black Muslim out of hatred for white Christians. You’ll be amazed, moved, and encouraged as you read their compelling stories and the stories of nine others who made The Unexpected Journey from non-Christian beliefs to faith in Jesus Christ. You’ll rediscover the power of the gospel. You might even be emboldened to tell others about Christ yourself.Unexpected journeys beyond• Mormonism• Judaism• Hinduism• Atheism• Jehovah’s Witness• Agnosticism• Wiccan Paganism• Buddhism• Unitarianism• Astrology• Islam• Satanism

Non FictionReligionThe Unexpected JourneyThom S. RainerZondervan
Gospel eBooks is a participant in the Amazon Services LLC Associates Program, an affiliate advertising program designed to provide a means for sites to earn advertising fees by advertising and linking to amazon.com. View our Privacy Policy.