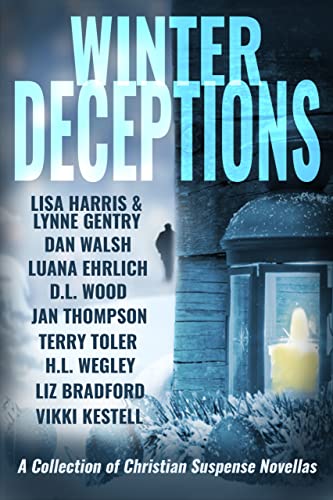 MURDER ON FLIGHT 91 by Lisa Harris and Lynne Gentry

When a passenger collapses on an international flight, is it a medical emergency, or attempted murder?

TWAS THE NIGHT by Dan Walsh

After experiencing an unspeakable tragedy, a young mother relocates from Brooklyn to a small mountain town in North Carolina. Will this be the fresh start she’s hoping for or the beginning of an even greater upheaval to her fragile world?

ONE WONDERS by Luana Ehrlich

Silas McKay’s worst fears are realized when his investigation takes an unexpected turn.

THE VOW by D.L. Wood

Kate’s husband left her a year ago, ending their marriage without warning. But when things turn sinister, will she be able to uncover what’s really going on before the danger closes in?

When Mira hires a former soldier to help her assassinate her mother’s killer, she doesn’t expect to target her own father.

Will Trigger, the loveable German Shepherd with military skills, be able to save a woman running from an abusive husband and a war hero with PTSD?

AGAINST THE DARKNESS by H.L. Wegley

When Meiling Chen flees to America with vengeful Chinese agents in pursuit, can she find an American medical researcher she can trust?

TOO LATE by Liz Bradford

Can Chloe Jacobs, a search and rescue K9 handler, overcome her past trauma before it’s too late for her and her partner, Josh Schneider, or will her fears cause a fatal mistake?

East of Dr. Daniel Bickel’s Albuquerque laboratory lies the old Manzano Weapons Storage Facility, a mountain with dangerous secrets that have all but been forgotten . . . or have they?