Tap Code: The Epic Survival Tale of a Vietnam POW and the Secret Code That Changed Everything

Tap Code: The Epic Survival Tale of a Vietnam POW and the Secret Code That Changed Everything
https://gospelebooks.net/removed/tap-code-epic-survival-tale-vietnam-pow-secret-code-changed-everything.html 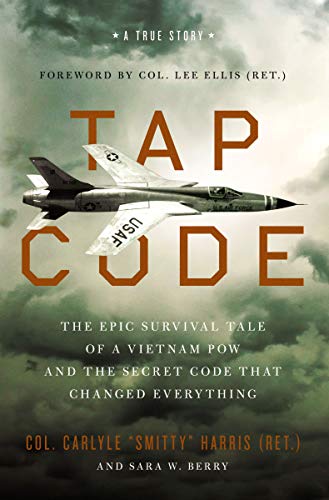 Tap Code shares never-before-told details of underground operations during the Vietnam War while weaving in an inspiring story of true love, honor, and courage as husband and wife endured the hardest circumstances they had ever faced.

When Air Force pilot Captain Carlyle “Smitty” Harris was shot down over Vietnam on April 4, 1965, he had no idea what horrors awaited him in the infamous Hoa Lo prison–nicknamed the “Hanoi Hilton.” Harris was the sixth American POW captured in the air war over North Vietnam, and for the next eight years, Smitty and hundreds of other American POWs–including John McCain and George “Bud” Day–suffered torture, solitary confinement, and abuse.

Their dignity was taken, their wills were challenged, and their bodies were bruised and battered. But in the midst of the struggle, Smitty remembered once learning the Tap Code–an old, long-unused World War II method of communication through tapping on a common water pipe. He covertly taught the code to many POWs, and in turn they taught others.

Simple and effective, the Tap Code quickly spread throughout the prison and became one of the most covert ways for POWs to communicate without their captors’ knowledge. It became a lifeline during their internment–a morale booster, a vehicle of unity, and a way to communicate the chain of command–and was instrumental in helping them prevail over a brutal enemy.

Back home, meanwhile, Harris’s wife, Louise, raised their three children alone, unsure of her husband’s fate. One of the first POW wives of the Vietnam War, she became a role model for many wives, advocating for herself and her children in her husband’s absence.

Told through both Smitty’s and Louise’s voices, Tap Code shares a riveting true story of ingenuity under pressure, strength and dignity in the face of the enemy, the love of family, and the hope, faith, and resolve necessary to endure even the darkest circumstances.

Carlyle S. HarrisTap CodeThe Epic Survival Tale of a Vietnam POW and the Secret Code That Changed EverythingZondervan
Gospel eBooks is a participant in the Amazon Services LLC Associates Program, an affiliate advertising program designed to provide a means for sites to earn advertising fees by advertising and linking to amazon.com. View our Privacy Policy.