Spirits in Bondage: A Cycle of Lyrics

Spirits in Bondage: A Cycle of Lyrics
https://gospelebooks.net/removed/spirits-bondage-cycle-lyrics.html 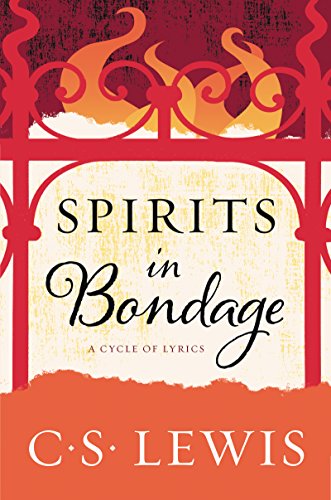 A repackaged edition of the revered author’s first book—a collection of poems, written in the wake of World War I, in which the young intellectual and soldier wrestles with the perplexing polarities of life, including love and war, evil and goodness, and other complex dichotomies.

In 1919, C. S. Lewis—the great British writer, scholar, lay theologian, broadcaster, Christian apologist, and bestselling author of Mere Christianity, The Screwtape Letters, The Great Divorce, The Chronicles of Narnia, and many other beloved classics—published his first book, Spirits in Bondage, under the pseudonym Clive Hamilton. Written when Lewis was a student at Oxford and during the war when he served at the front in France, Spirits in Bondage reflects the intellectual and spiritual struggles of a young man wounded by war and conflicted over faith. As he contemplates the nature of morality, love, the presence of evil, the possibility of God, and other profound questions. Lewis reveals a side of himself unfamiliar to many readers.

A Cycle of LyricsC.S. LewisHarperOneSpirits in Bondage
Gospel eBooks is a participant in the Amazon Services LLC Associates Program, an affiliate advertising program designed to provide a means for sites to earn advertising fees by advertising and linking to amazon.com. View our Privacy Policy.