He Shines in All That’s Fair: Culture and Common Grace

He Shines in All That\’s Fair: Culture and Common Grace
https://gospelebooks.net/removed/shines-thats-fair-culture-common-grace.html 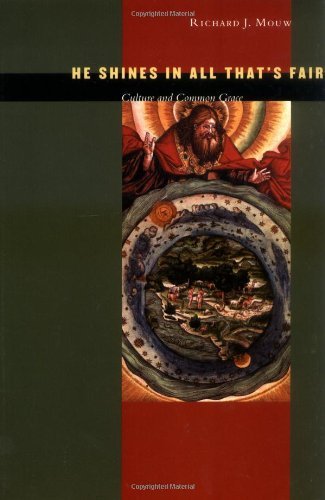 How do Christians account for the widespread presence of goodness in a fallen world? Different theological perspectives have presented a range of answers to this fundamental question over the centuries. In He Shines in All That’s Fair Richard Mouw brings the historic insights of Calvinism to bear on this question and reinterprets them for a broader audience at the turn of the twenty-first century.

Mouw examines long-standing Reformed arguments between those who champion the doctrine of common grace and those who emphasize an antithesis between the church and the world. Defenders of common grace account for the goodness in the world by insisting that God’s grace goes beyond salvation to more general gifts of beauty, virtue, and excellence to all human beings — including those who do not believe in God. Those who reject the doctrine of common grace, on the other hand, emphasize the fallenness of the world and the need for the church to maintain a dramatic contrast to it. These divergent theological perspectives, while seemingly remote and abstract, lead to questions with very practical implications: What common ground do Christians share with those outside the faith? How should Christian treat their non-Christian neighbors? How should Christians relate to the world around them? Does God disapprove when Christians form close friendships with people who are “of the world”? Ought Christians to identify with the joys and sorrows of those who do not confess Christ as their Savior and Lord?

In the course of this book Mouw looks at these topics, connecting the larger theological discussions to pressing issues in contemporary society. He insists that we have much to learn from thinkers who have rejected the idea of common (non-saving) grace, but he also defends the traditional common grace teachings, showing how they provide an important basis for wrestling with key challenges in present-day culture. Ultimately, Mouw argues forcefully for a Calvinism that is capable of standing in awe before the mysteries of God’s gracious dealings with all human beings — and indeed the whole creation.

Presented as the 2000 Stob Lectures at Calvin College and Calvin Theological Seminary, these soundly reasoned, elegantly written chapters offer an updated, robust understanding of common grace that will be of great value to anyone interested in the relation of church and culture.

Culture and Common GraceEerdmansHe Shines in All That's FairRichard J. Mouw
Gospel eBooks is a participant in the Amazon Services LLC Associates Program, an affiliate advertising program designed to provide a means for sites to earn advertising fees by advertising and linking to amazon.com. View our Privacy Policy.