The Secret of Pembrooke Park

The Secret of Pembrooke Park
https://gospelebooks.net/removed/secret-pembrooke-park.html 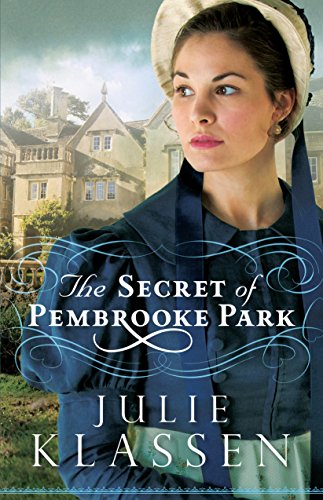 “A remarkable tale with many unpredictable twists and turns.”–CBA Retailers+Resources

“A treat for [readers] who want their historical romances served up with a generous dash of mystery.”–Booklist

“[Klassen’s] work appeals to all who seek a riveting Regency romance.”–RT Book Reviews

Abigail Foster is the practical daughter. She fears she will end up a spinster, especially as she has little dowry, and the one man she thought might marry her seems to have fallen for her younger, prettier sister.

Facing financial ruin, Abigail and her father search for more affordable lodgings, until a strange solicitor arrives with an astounding offer: the use of a distant manor house abandoned for eighteen years. The Fosters journey to imposing Pembrooke Park and are startled to find it entombed as it was abruptly left: tea cups encrusted with dry tea, moth-eaten clothes in wardrobes, a doll’s house left mid-play…

The handsome local curate welcomes them, but though he and his family seem acquainted with the manor’s past, the only information they offer is a stern warning: Beware trespassers drawn by rumors that Pembrooke Park contains a secret room filled with treasure.

This catches Abigail’s attention. Hoping to restore her family’s finances–and her dowry–Abigail looks for this supposed treasure. But eerie sounds at night and footprints in the dust reveal she isn’t the only one secretly searching the house.

Then Abigail begins receiving anonymous letters, containing clues about the hidden room and startling discoveries about the past.

Bethany House PublishersFictionJulie KlassenThe Secret of Pembrooke Park
Gospel eBooks is a participant in the Amazon Services LLC Associates Program, an affiliate advertising program designed to provide a means for sites to earn advertising fees by advertising and linking to amazon.com. View our Privacy Policy.