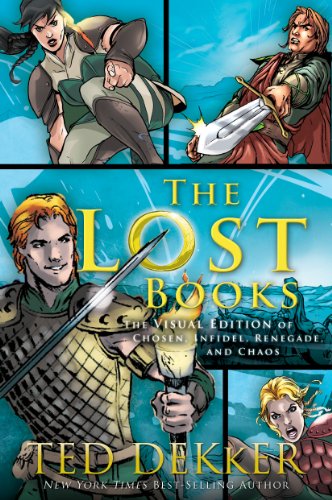 “[A] full-force clash between good and evil. A tornado of action and strategem…will leave you knowing for certain you are not in Kansas anymore.”–TheSuspenseZone.com (for Infidel)

The Circle universe made popular by Ted Dekker in his New York Times best-selling series (Black, Red, White, and Green) is brought back to vivid life–this time from the vantage point of four teens. And never have the stakes for survival and destruction been so high.

From thousands of new Forest Guard recruits aged 16 and 17, Thomas Hunter chooses four to lead a special mission against the Horde. But before that mission fully begins, it abruptly changes to an even greater endgame. Now these four teens must find the seven lost Books of History before dark forces do. For these seven books have immense power over the past, present, and future–controlling not only the destiny of their world…but that of ours as well.

Prepare for a stunning visual adventure as the Chosen face renegades and betrayals across two realities in their quest to find what’s been lost.