F.B. Meyer: If I had a Hundred Lives…

F.B. Meyer: If I had a Hundred Lives…
https://gospelebooks.net/removed/f-b-meyer-hundred-lives.html 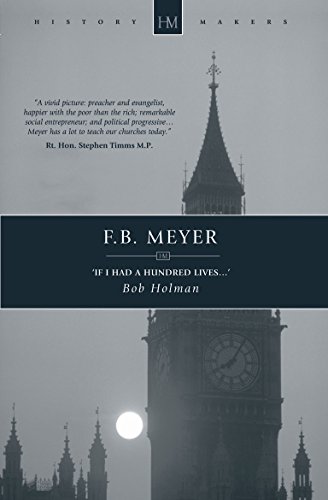 On F. B. Meyer’s death in 1929 The Daily Telegraph called him ‘The Archbishop of the Free Churches’. The New York Observer noted that ‘He has an international fame and his services are constantly sought by churches over the wide and increasing empire of Christendom.’ To the secular press of his time he was a key player on the world scene – yet this is the first chronological account of Meyer’s life. Meyer was the minister one of Britain’s first ‘megachurches’. He was friends with D. L. Moody and ministered on both sides of the Atlantic, mirroring in America what D. L. Moody was able to undertake in the U.K. He came from a conventional, middle class Victorian background and experienced no dramatic conversion. He was not a distinguished scholar or dramatic orator. His slight figure and retiring manner meant that he did not stand out in a crowd. Yet he drew crowds by the thousands, wrote books, which sold by the millions, and attracted working class people.The range of Meyer’s activities is astonishing: preacher, pastor, writer, social activist, free church leader, Baptist president, advocate for missionary work and more. In his last years, he declared, ‘If I had a hundred lives, they should be at Christ’s disposal.’ At times, it seemed as though he was living a hundred lives!

Bob HolmanChristian Focus PublicationsF.B. MeyerIf I had a Hundred Lives...
Gospel eBooks is a participant in the Amazon Services LLC Associates Program, an affiliate advertising program designed to provide a means for sites to earn advertising fees by advertising and linking to amazon.com. View our Privacy Policy.