A Dance in Donegal

A Dance in Donegal
https://gospelebooks.net/removed/a-dance-in-donegal-2.html 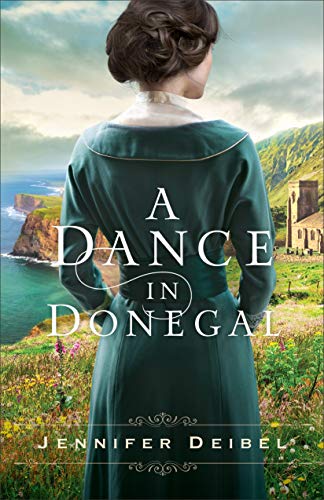 All of her life, Irish-American Moira Doherty has relished her mother’s descriptions of Ireland. When her mother dies unexpectedly in the summer of 1920, Moira decides to fulfill her mother’s wish that she become the teacher in Ballymann, her home village in Donegal, Ireland.

After an arduous voyage, Moira arrives to a new home and a new job in an ancient country. Though a few locals offer a warm welcome, others are distanced by superstition and suspicion. Rumors about Moira’s mother are unspoken in her presence but threaten to derail everything she’s journeyed to Ballymann to do. Moira must rely on the kindness of a handful of friends–and the strength of Sean, an unsettlingly handsome thatcher who keeps popping up unannounced–as she seeks to navigate a life she’d never dreamed of . . . but perhaps was meant to live.

Jennifer Deibel’s debut novel delights the senses, bringing to life the sights, sounds, smells, and language of a lush country and a colorful people. Historical romance fans will embrace her with open arms.

“God’s redemptive love is the highlight of this debut work . . . Fans of historical Christian romances in the vein of Kristi Ann Hunter and Jen Turano will want to keep an eye on Deibel.”–Library Journal

“Deibel’s exemplarily executed debut is a touching tale of love and forgiveness that also beautifully captures the warmth and magic of 1920s Ireland. The author’s flair for vivid characterization is especially striking in Moira, whose realistic struggles with her faith give her memorable depth and relatability.”–Booklist

A Dance in DonegalJennifer DeibelRevell
Gospel eBooks is a participant in the Amazon Services LLC Associates Program, an affiliate advertising program designed to provide a means for sites to earn advertising fees by advertising and linking to amazon.com. View our Privacy Policy.