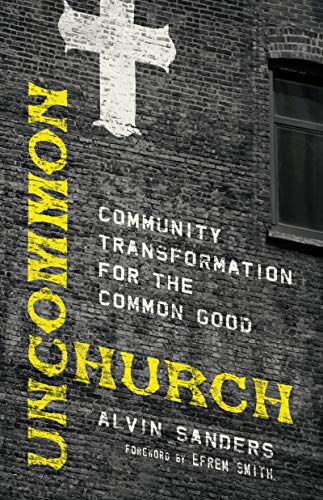 How can the people of God develop churches in ways that help and don’t hurt poor neighborhoods? In urban ministry, Christians too often treat the poor as goodwill projects instead of people. Because of this mindset, many remain unchurched. Healthy, local, urban churches are needed because they combine personal empowerment and community transformation.
Every poor neighborhood needs uncommon churches that will seek the common good of their communities. Alvin Sanders engages hard truths about these neighborhoods and provides a model for how to do ministry in difficult conditions. The local, urban church is the key to community transformation, as it plays three crucial roles of empowering, partnering, and reaching.
Pastors and church planters interested in Christian community development will find here practical insights into the power of the local church, which is often underrated. Churches can serve their communities and improve the quality of life of every facet of the neighborhood.

Applying the Sermon: How to Balance Biblical Integrity and Cultural Relevance 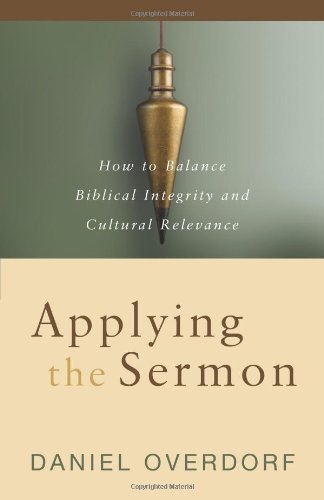 Even the most seasoned homileticians balk at sermon application. Why? Because
application requires preachers to toss a grenade-like “thus saith the Lord” into
people’s lives, and to do so repeatedly. -From the introduction

Despite the concern many pastors feel when it comes to sermon application, most
homiletics texts devote little more than a chapter, if that, to this vital
topic. Daniel Overdorf has filled this glaring gap with Applying the Sermon.
This book equips preachers to develop sermon application that grows
from the biblical text and addresses the needs of contemporary congregations.

Applying the Sermon: How to Balance Biblical Integrity and Cultural Relevance
https://gospelebooks.net/removed/applying-sermon-balance-biblical-integrity-cultural-relevance.html 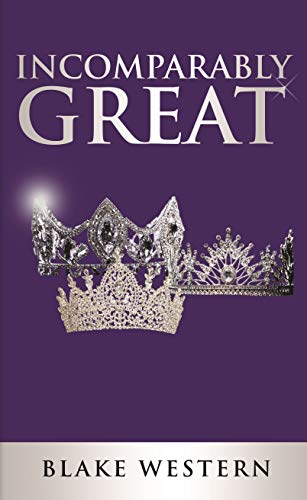 This is a series of messages based on the Gospel of John. It is not a commentary. Each message is self-contained. Each chapter is expository showing a different aspect of Jesus’ greatness. It is not an academic work but is written simply and is easy to understand. There are chapters on “The Anger of Jesus” and “The Hated Christ.” The Scriptures are selected and the book does not cover all the Bible passages. 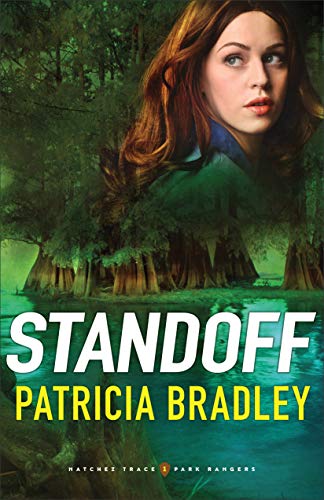 The Natchez Trace National Parkway stretches 444 miles from Nashville to Natchez, the oldest town on the Mississippi River. It’s the perfect road for a relaxed pleasure drive. Unfortunately for park ranger Luke Fereday, lately it’s being used to move drugs. Sent to Natchez to infiltrate the organization at the center of the drug ring, Luke arrives too late to a stakeout and discovers the body of his friend, park ranger John Danvers.

John’s daughter Brooke is determined to investigate her father’s murder, but things are more complicated than they first appear, and Brooke soon finds herself the target of a killer who will do anything to silence her. Luke will have his hands full keeping her safe. But who’s going to keep him safe when he realizes he’s falling–hard–for the daughter of the man he failed to save?

Award-winning author Patricia Bradley introduces you to a new series set in the sultry South that will have you wiping your brow and looking over your shoulder. 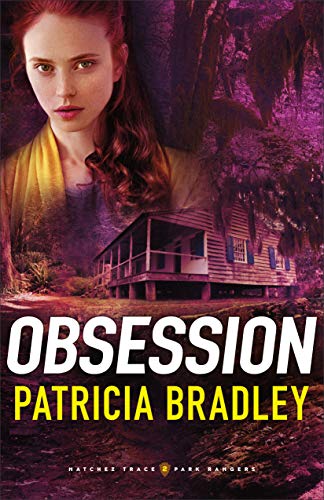 Natchez Trace Ranger and historian Emma Winters hoped never to see Sam Ryker again after she broke off her engagement to him. But when shots are fired at her at a historical landmark just off the Natchez Trace, she’s forced to work alongside Sam as the Natchez Trace law enforcement district ranger in the ensuing investigation. To complicate matters, Emma has acquired a delusional secret admirer who is determined to have her as his own. Sam is merely an obstruction, one which must be removed.

Sam knows that he has failed Emma in the past and he doesn’t intend to let her down again. Especially since her life is on the line. As the threads of the investigation cross and tangle with their own personal history, Sam and Emma have a chance to discover the truth, not only about the victim but about what went wrong in their relationship.

Award-winning author Patricia Bradley will have the hairs standing up on the back of your neck with this nail-biting tale of obsession, misunderstanding, and forgiveness. 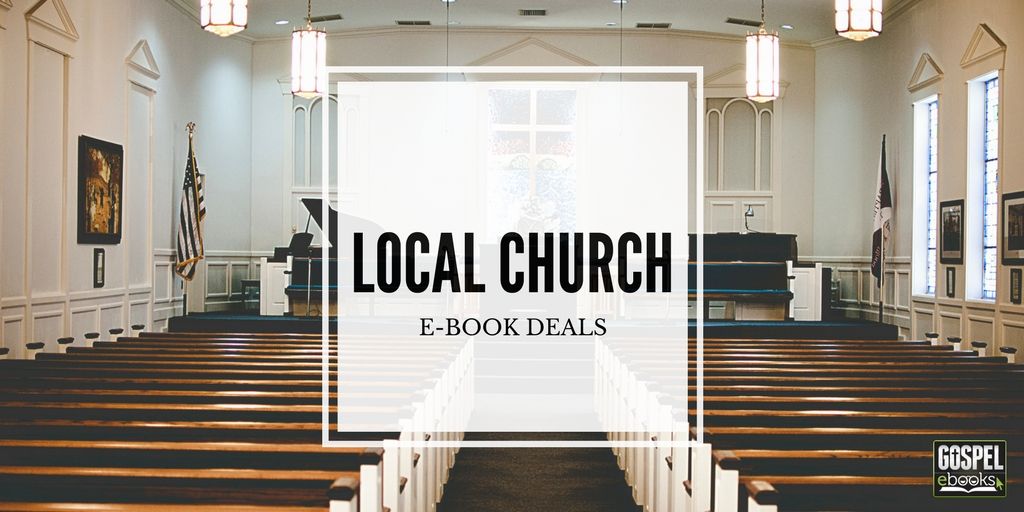 In this grab bag, we have 7 e-books on church & mission. The prices and sale dates that they have provided are under each book cover.

The Way of the Shepherd: Seven Secrets to Managing Productive People 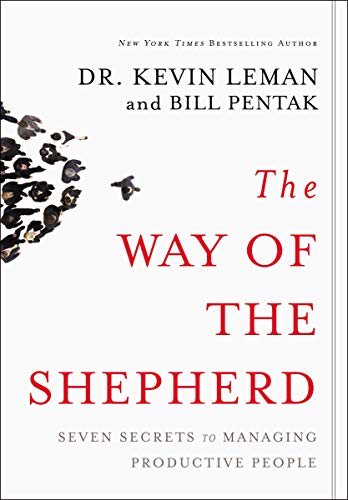 Written as a heartwarming contemporary parable, this book points you beyond worn-out fads and flavor-of-the-month management techniques to the strategies that will make you a truly outstanding leader.

Find inspiration and a fresh perspective on the art of leadership in this account of a cub reporter who lands the interview of a lifetime and walks away with the keys to exceptional leadership. When the reporter meets with the most respected CEO in America, the businessman shares the seven secrets he learned long ago from his mentor–an eccentric but brilliant professor who taught him proven management principles that, while ancient in origin, are applicable in today’s fast-paced, high-tech world.

Through this charming story dotted with humor, you’ll learn how to infuse work with meaning and how to engage, energize, and ignite their workforce by using these same secrets, which include:

END_OF_DOCUMENT_TOKEN_TO_BE_REPLACED

The Way of the Shepherd: Seven Secrets to Managing Productive People
https://gospelebooks.net/removed/way-shepherd-seven-secrets-managing-productive-people.html 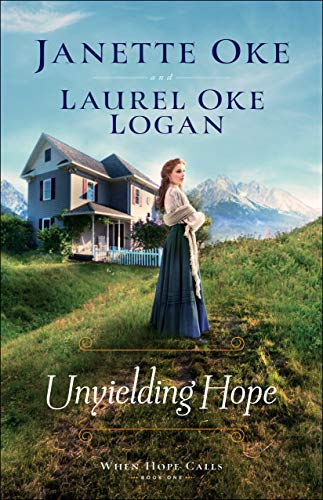 As a young girl, Lillian Walsh lost both her parents and a younger sister. Now in her twenties, after enduring the death of her adoptive mother, Lillian must find her place in the world. Just as her adoptive father is leaving for an extended trip to his native Wales, a lawyer appears at the door to inform Lillian that she has inherited a small estate from her birth parents–and that the sister she had long believed dead is likely alive.

When she discovers that her sister, Grace, is living in a city not far away, Lillian rushes to a reunion, fearful that the years of separation will make it hard to reconnect.

When the two sisters meet, Grace is not at all what Lillian expected to find. Though her circumstances have been difficult, Grace has big dreams. Can Lillian set aside her own plans to join her sister in an adventure that will surely change them both?