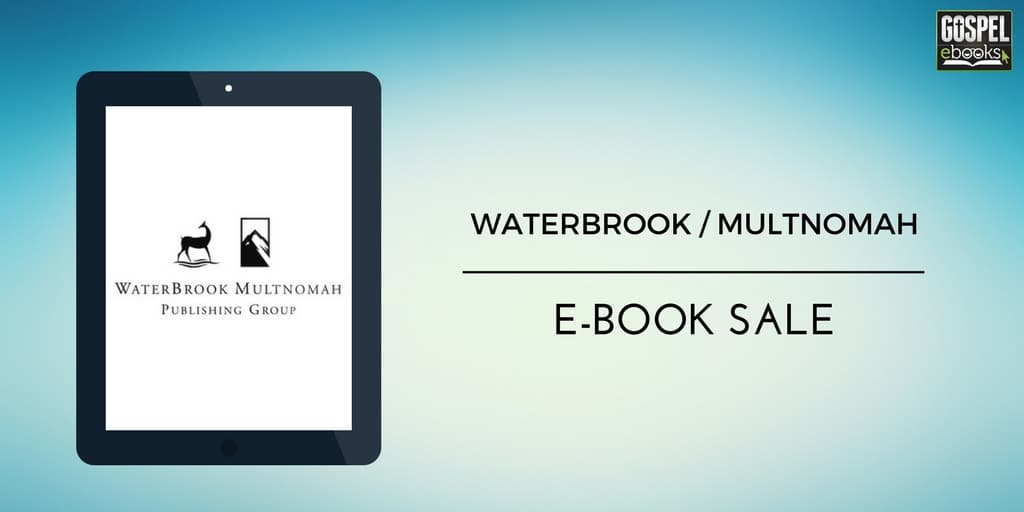 In this grab bag we have 4 e-books from Waterbrook Multnomah. The prices and sale dates that the publisher has provided are under each ebook cover.

Jesus: An Intimate Portrait of the Man, His Land, and His People This expanded retelling of the life of Jesus includes all the details from the Gospels in chronological order, the geopolitical scene, the historical and cultural settings, and the likely emotions and motives of those who interacted with Him. Here is a great introduction to the greatest man who ever lived for those who don’t know much about Him, and a fascinating read for those who are familiar with the Gospel accounts.

Jesus: An Intimate Portrait of the Man, His Land, and His People
https://gospelebooks.net/removed/jesus-intimate-portrait-man-land-people.html Sometimes, we fall in love on mission trips even though we know we’ll break up when we get back. Sometimes, you have to shot block a friend’s prayer because she’s asking God to bless an obviously bad dating relationship. Sometimes, you think, “I wish I had a t-shirt that said ‘I direct deposit my tithe’ so people wouldn’t judge me.” Sometimes, the stuff that comes with faith is funny. This is that stuff. Jonathan Acuff’s Stuff Christians Like Ebook is your field guide to all things Christian. You’ll learn the culinary magic of the crock-pot. Think you’ve got a Metro worship leader—use Acuff’s checklist. Want to avoid a prayer handholding faux pas? Acuff has you covered. Like a satirical grenade, Acuff brings us the humor and honesty that galvanized more than a million online readers from more than 200 countries in a new portable version. Welcome to the funny side of faith.

In this grab bag we have 4 adventure e-bibles from Zonderkidz. The prices and sale dates that the publisher has provided are under each ebook cover. 2011 Carol Award winner for Women’s Fiction from ACFW (American Christian Fiction Writers)
Four American women, all with their own challenges, embark on a mission trip to South Africa. Their lives are changed as they encounter a group of South African women who suffer from AIDS yet demonstrate great joy and faith in the face of overwhelming adversity. When the Americans discover the amazing beadwork that has been taught to generations of women in the community, they uncover a way to help these proud people support their families by selling their craft.

Pagans: The End of Traditional Religion and the Rise of Christianity A provocative and contrarian religious history that charts the rise of Christianity from the point of view of traditional” religion from the religious scholar and critically acclaimed author of Augustine.
Pagans explores the rise of Christianity from a surprising and unique viewpoint: that of the people who witnessed their ways of life destroyed by what seemed then a powerful religious cult. These “pagans” were actually pious Greeks, Romans, Syrians, and Gauls who observed the traditions of their ancestors. To these devout polytheists, Christians who worshipped only one deity were immoral atheists who believed that a splash of water on the deathbed could erase a lifetime of sin.

Religious scholar James J. O’Donnell takes us on a lively tour of the Ancient Roman world through the fourth century CE, when Romans of every nationality, social class, and religious preference found their world suddenly constrained by rulers who preferred a strange new god. Some joined this new cult, while others denied its power, erroneously believing it was little more than a passing fad.

In Pagans, O’Donnell brings to life various pagan rites and essential features of Roman religion and life, offers fresh portraits of iconic historical figures, including Constantine, Julian, and Augustine, and explores important themes—Rome versus the east, civilization versus barbarism, plurality versus unity, rich versus poor, and tradition versus innovation—in this startling account.

Pagans: The End of Traditional Religion and the Rise of Christianity
https://gospelebooks.net/removed/pagans-end-traditional-religion-rise-christianity.html

Power in the Blood of Christ Let national best-selling author and Bible study teacher Jennifer Kennedy Dean help you unlock the life-changing mysteries of often-read biblical texts in her study Power in the Blood of Christ. As you walk through this eight-week, interactive study, begin to realize anew the cleansing power of Christ’s blood in your own life. Packed with substance, Power in the Blood of Christ explores the immense power of the blood of Christ in the life of the believer. This blood has the power to cleanse from sin and is the very heartbeat of the living, active Word of God. Join Dean as she traces the thread that runs through the entire Bible, tying it into a comprehensive whole.

Power in the Blood of Christ
https://gospelebooks.net/removed/power-blood-christ.html