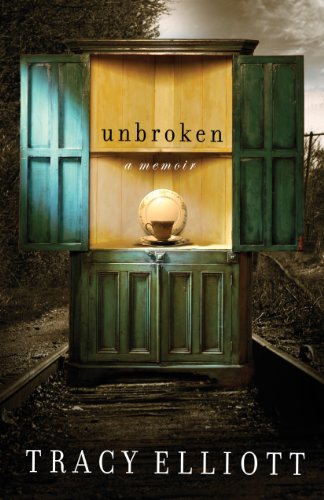 All the furniture in the house got wrecked except this one old wooden china cabinet in my grandmother’s kitchen, which somehow remained standing despite all odds. One night, in the midst of a prayer, I glanced over at it and thought, If this cabinet could talk… What madness it had seen. The Lord spoke to me then. “You’re both here, and you both survived, and just like this cabinet, you remain unbroken.”

Tracy Elliott led a rough life. This honest memoir takes you into the heart of the gritty realities of the street and a life of addiction. But it is the story of a broken person’s history and how God taught her that, in his loving eyes, she is whole.

As a young, orphaned girl growing up in her grandmother’s house with five alcoholic uncles, Tracy witnessed constant violence and experienced abuse. Later in life, as a stripper in her mid-twenties, she lived hard and suffered the consequences. Now, she tells how her life was put back together by the grace of God.

Tracy says, “No matter where you came from and what you’ve done, God wants you. No one is unforgivable, and no one is beneath His grace. God loved me when I was seven years old in old brown clogs, He loved me when I was working in strip clubs, and He loves me still.”

Unbroken is a moving story of a young woman who has discovered the power of God’s loving forgiveness and grace? and who wants to share it with a hurting world. In this captivating and lavishly illustrated young adult edition of her award-winning #1 New York Times bestseller, Laura Hillenbrand tells the story of a former Olympian’s courage, cunning, and fortitude following his plane crash in enemy territory. This adaptation of Unbroken introduces a new generation to one of history’s most thrilling survival epics.

On a May afternoon in 1943, an American military plane crashed into the Pacific Ocean and disappeared, leaving only a spray of debris and a slick of oil, gasoline, and blood. Then, on the ocean surface, a face appeared. It was that of a young lieutenant, the plane’s bombardier, who was struggling to a life raft and pulling himself aboard. So began one of the most extraordinary sagas of the Second World War.

The lieutenant’s name was Louis Zamperini. As a boy, he had been a clever delinquent, breaking into houses, brawling, and stealing. As a teenager, he had channeled his defiance into running, discovering a supreme talent that carried him to the Berlin Olympics. But when war came, the athlete became an airman, embarking on a journey that led to his doomed flight, a tiny raft, and a drift into the unknown.

Ahead of Zamperini lay thousands of miles of open ocean, leaping sharks, a sinking raft, thirst and starvation, enemy aircraft, and, beyond, a trial even greater. Driven to the limits of endurance, Zamperini would respond to desperation with ingenuity, suffering with hope and humor, brutality with rebellion. His fate, whether triumph or tragedy, would hang on the fraying wire of his will.

Featuring more than one hundred photographs plus an exclusive interview with Zamperini, this breathtaking odyssey—also captured on film by director Angelina Jolie—is a testament to the strength of the human spirit and the ability to endure against the unlikeliest of odds.

“This adaptation of Hillenbrand’s adult bestseller is highly dramatic and exciting, as well as painful to read as it lays bare man’s hellish inhumanity to man.”—Booklist, STARRED

“This captivating book emphasizes the importance of determination, the will to survive against impossible odds, and support from family and friends. A strong, well-written work.”—SLJ In boyhood, Louis Zamperini was an incorrigible delinquent. As a teenager, he channeled his defiance into running, discovering a prodigious talent that had carried him to the Berlin Olympics. But when World War II began, the athlete became an airman, embarking on a journey that led to a doomed flight on a May afternoon in 1943. When his Army Air Forces bomber crashed into the Pacific Ocean, against all odds, Zamperini survived, adrift on a foundering life raft. Ahead of Zamperini lay thousands of miles of open ocean, leaping sharks, thirst and starvation, enemy aircraft, and, beyond, a trial even greater. Driven to the limits of endurance, Zamperini would answer desperation with ingenuity; suffering with hope, resolve, and humor; brutality with rebellion. His fate, whether triumph or tragedy, would be suspended on the fraying wire of his will.

Unbroken is an unforgettable testament to the resilience of the human mind, body, and spirit, brought vividly to life by Seabiscuit author Laura Hillenbrand. END_OF_DOCUMENT_TOKEN_TO_BE_REPLACED