The Christian’s Only Comfort in Life and Death: An Exposition of the Heidelberg Catechism 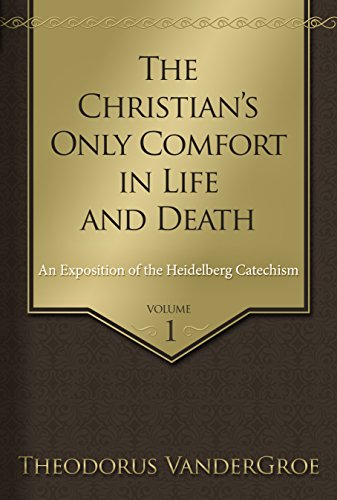 Endorsements:
“Theodore VanderGroe was one of the most renowned Dutch ministers of the eighteenth century. He referred to his doctrine as ‘our healthy, mystical divinity.’ His Reformed experiential mysticism is healthy, for it has God’s Word as its benchmark. Even today, many of his works are well known in the Reformed-experiential segment of the Dutch population. Acquaintance with his exposition of the Heidelberg Catechism is, however, minimal, and I rejoice that this will no longer be the case with this publication. The fundamental tenor of VanderGroe’s preaching that the law wounds and the gospel heal also comes to the fore in his exposition of the Heidelberg Catechism.

Amid the current prevalence of so much superficial literature, it is refreshing to read this exposition of the catechism. His exposition of the preamble of the law, prior to his sermon on Lord’s Day 34, is both surprising and deeply experiential. Never have I read a treatment on this subject that is as clear and as scriptural as this. I wholeheartedly wish to endorse and recommend this beautiful two-volume work that has been forgotten far too long and pray that it will find a wide reception in the English language.” — Cornelis Harinck, prolific author and retired minister of the Gereformeerde Gemeenten in the Netherlands

The Christian’s Only Comfort in Life and Death: An Exposition of the Heidelberg Catechism
https://gospelebooks.net/removed/christians-comfort-life-death-exposition-heidelberg-catechism.html

Kregel: Voices Behind the Veil: The World of Islam Through the Eyes of Women by Ergun Mehmet Caner vs. One Woman Against the Reich: The True Story of a Mother’s Struggle to Keep Her Family Faithful to God in a World Gone Mad by Helmut W. Ziefle
New Leaf: Bible Code Bombshell by R. Edwin Sherman vs. How Do We Know the Bible is True? Vol 1 by Ken Ham & Bodie Hodge
Intervarsity Press: Fearfully and Wonderfully: The Marvel of Bearing God’s Image by Dr. Paul Brand & Philip Yancey  vs. Embracing the Body: Finding God in Our Flesh and Bone by Tara M. Owens
Christian Focus: Voices: Who Am I Listening To? by Andy Prime  vs. Taking the Bible at its Word by Paul Wells
Moody Publishers: The Wonder of the Word: Hearing the Voice of God in Scripture by Tony Evans vs. The Power of Preaching: Crafting a Creative Expository Sermon by Tony Evans
Reformation Heritage: The Christian’s Only Comfort in Life and Death: An Exposition of the Heidelberg Catechism by Theodorus VanderGroe vs. Theoretical-Practical Theology Volume 1: Prolegomena by Petrus van Mastricht