Tag: Secrets of the Sixth Edition

Secrets of the Sixth Edition 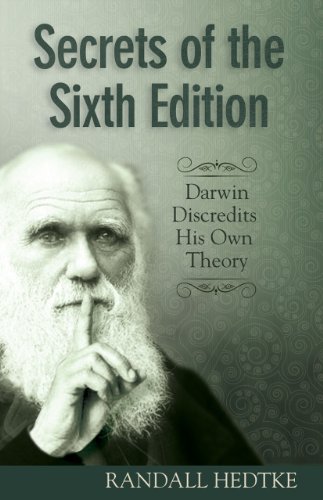 Darwin’s On the Origin of the Species was originally released in 1859, and by 1872, the sixth and last edition was published, becoming the defining text for evolutionists. This controversial work has become the foundation of modern textbooks for scientific studies in origins, though Darwin himself expressed deep doubts about his own speculations and suppositions.

Secrets of the Sixth Edition by Randall Hedtke exposes the critical flaws of this landmark book by using Darwin’s own words against him.

* Addresses strategies for possible changes to the curriculum to address weaknesses in the evolutionary hypothesis.

Take an insightful look at Darwin’s work and its inaccuracies from a fresh and logical perspective. You will discover the often ignored reasoning behind his own abandonment of some of the core mechanisms of evolution later in his life, though they remain unchallenged pillars of unquestioning science today. This informative and easy-to-read study boldly declares the powerful truth that only biblical creation can explain.

Secrets of the Sixth Edition
https://gospelebooks.net/removed/secrets-sixth-edition.html

Kregel: The Tabernacle–Shadows of the Messiah: Its Sacrifices, Services, and Priesthood by David M. Levy vs. Numbers in the Bible: God’s Unique Design in Biblical Numbers by Robert D. Johnston

New Leaf: Secrets of the Sixth Edition by Randall Hedtke vs. Replacing Darwin: The New Origin of Species by Nathaniel T Jeanson

Harvest House: Just One Word: 90 Devotions to Invite Jesus In by Susie Crosby vs. Called for a Purpose: Daily Devotions to Help You Pursue God’s Plan by Tony Evans

Reformation Heritage: In Remembrance of Him: Profiting from the Lord’s Supper by Guilelmus Saldenus and Wilhemus a Brakel vs. Essential Truths in the Heart of a Christian by Wilhelmus Schortinghuis

You Choose The Sale: May 14-20
https://gospelebooks.net/uncategorized/choose-sale-may-14-20-2.html