Tag: A Treasures of the Nile Novel

Miriam: A Treasures of the Nile Novel 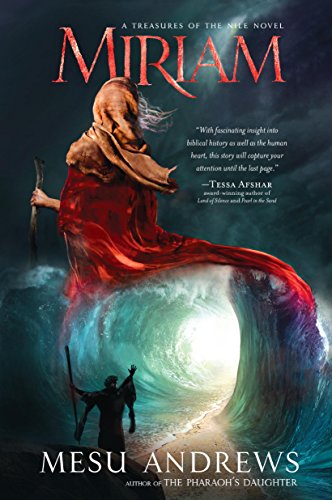 The Hebrews call me prophetess, the Egyptians a seer.
But I am neither. I am simply a watcher of Israel
and the messenger of El Shaddai.
When He speaks to me in dreams, I interpret. When He whispers a melody, I sing.

At eighty-six, Miriam had devoted her entire life to loving El Shaddai and serving His people as both midwife and messenger. Yet when her brother Moses returns to Egypt from exile, he brings a disruptive message. God has a new name – Yahweh – and has declared a radical deliverance for the Israelites.

Miriam and her beloved family face an impossible choice: cling to familiar bondage or embrace uncharted freedom at an unimaginable cost. Even if the Hebrews survive the plagues set to turn the Nile to blood and unleash a maelstrom of frogs and locusts, can they weather the resulting fury of the Pharaoh?

Enter an exotic land where a cruel Pharaoh reigns, pagan priests wield black arts, and the Israelites cry out to a God they only think they know.

Miriam: A Treasures of the Nile Novel
https://gospelebooks.net/removed/miriam-treasures-nile-novel.html

In this grab bag we have 3 e-books from Waterbrook Multnomah which were written by various authors. The prices and sale dates that the publisher has provided are under each ebook cover.

The Pharaoh’s Daughter: A Treasures of the Nile Novel The first book in the Treasures of the Nile series

Anippe has grown up in the shadows of Egypt’s good god Pharaoh, aware that Anubis, god of the afterlife, may take her–or her siblings–at any moment. She watched him snatch her mother and infant brother during childbirth, a moment which awakens in her a terrible dread of ever bearing a child. When she learns that she is to be become the bride of Sebak, a kind but quick-tempered Captain of Pharaoh Tut’s army, Anippe launches a series of deceptions with the help of the Hebrew midwives—women ordered by Tut to drown the sons of their own people in the Nile—in order to provide Sebak the heir he deserves and yet protect herself from the underworld gods.

When she finds a baby floating in a basket on the great river, Anippe believes Egypt’s gods have answered her pleas, entrenching her more deeply in deception and placing her and her son Mehy, whom handmaiden Miriam calls Moses, in mortal danger. As bloodshed and savage politics shift the balance of power in Egypt, the gods reveal their fickle natures and Anippe wonders if her son, a boy of Hebrew blood, could one day become king. Or does the god of her Hebrew servants, the one they call El Shaddai, have a different plan for them all?

The Pharaoh’s Daughter: A Treasures of the Nile Novel
https://gospelebooks.net/removed/pharaohs-daughter-treasures-nile-novel.html