A Year of Living Prayerfully

A Year of Living Prayerfully
https://gospelebooks.net/removed/year-living-prayerfully-2.html 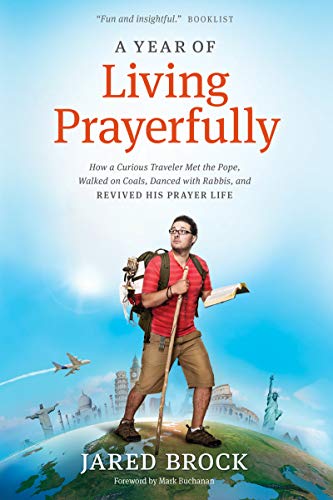 Is Anyone Listening? Do My Prayers Really Change Anything?

Jared Brock sensed that something was missing in his prayer life, so he embarked on a yearlong journey to rediscover the power of prayer (and eat some delicious falafel).

FOLLOW JARED ON A 37,000-MILE TRIP AROUND THE WORLD AS HE…
* Dances with Hasidic Jews in Brooklyn
* Discovers the 330-year-old home of Brother Lawrence
* Burns his clothes at the end of the Camino de Santiago
* Attends the world’s largest church in Seoul
* Visits Westboro Baptist Church
* Tries to stay out of trouble in North Korea
* Attempts fire walking (with only minor burns)

Although up to 90% of us pray, very few of us feel like we’ve mastered prayer. A Year of Living Prayerfully is a fascinating, humorous, globe-trotting exploration of prayer that will help you grow your own prayer life.

While filming a documentary about sex trafficking, Jared and Michelle Brock felt a deep need for prayer in their personal lives. In an effort to learn more about prayer, the couple traveled the globe, exploring the great Judeo-Christian prayer traditions: in mountains and monasteries, in Christian communities and cathedrals, standing up and lying down, every hour and around the clock.

Jared’s witty reflections on his fast-paced journey will both entertain and inspire you to think about your own prayer journey.

A Year of Living PrayerfullyJared BrockSteward Communications
Gospel eBooks is a participant in the Amazon Services LLC Associates Program, an affiliate advertising program designed to provide a means for sites to earn advertising fees by advertising and linking to amazon.com. View our Privacy Policy.