What’s So Funny?: My Hilarious Life 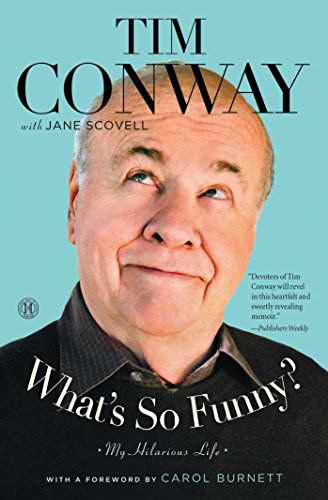 NOTE: Tim Conway passed away on Tuesday May 14th at the age of 85.

Six-time Emmy Award-winning funnyman Tim Conway, best known for his roles on The Carol Burnett Show, offers a straight-shooting and hilarious memoir about his life on stage and off as an actor and comedian.

In the annals of TV history, few entertainers have captured as many hearts, tickled as many funny bones, and brought as many families together in living rooms across America as Tim Conway. In What’s So Funny? he brings his hilarious hijinks from the screen to the page.

Conway’s often-improvised humor, razor-sharp timing, and hilarious characters have made him one of the funniest and most authentic performers to grace the stage and studio. As Carol Burnett has said, “there’s no one funnier” than Tim Conway. Now, Conway takes us on a seventy-year, rags-to-riches journey that is touchingly comical and ultimately inspiring, from his pranks in small Ohio classrooms during the Great Depression to his pitch-perfect performances on national TV and in major motion pictures. Along the way, Conway shares hilarious and often moving accounts of the glory days of The Carol Burnett Show; his famous partnerships with entertainment greats like Harvey Korman, Don Knotts, and Dick Van Dyke; and his friendships with stars like Betty White, Bob Newhart, and, of course, Carol Burnett, who also provides an intimate forward to the book.

As Conway continues to tour the country giving live comedy performances that enchant his always eager audiences, What’s So Funny? brings his warmth, humor, and heart to delight and inspire fans everywhere.

Howard BooksTim ConwayWhat's So Funny
Gospel eBooks is a participant in the Amazon Services LLC Associates Program, an affiliate advertising program designed to provide a means for sites to earn advertising fees by advertising and linking to amazon.com. View our Privacy Policy.