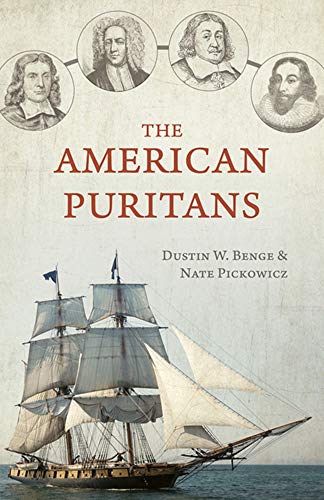 In ‘The American Puritans’, Dustin Benge and Nate Pickowicz tell the story of the first hundred years of Reformed Protestantism in New England through the lives of nine key figures: William Bradford, John Winthrop, John Cotton, Thomas Hooker, Thomas Shepard, Anne Bradstreet, John Eliot, Samuel Willard, and Cotton Mather. Here is sympathetic yet informed history, a book that corrects many myths and half-truths told about the American Puritans while inspiring a current generation of Christians to let their light shine before men.

Authors
DUSTIN W. BENGE (PhD, The Southern Baptist Theological Seminary) is provost of Union School of Theology, Wales, visiting professor of Munster Bible College, Cork, Ireland and a Senior Fellow of The Andrew Fuller Center for Baptist Studies. In addition, Dustin is the author of several books, writes regularly for Reformanda Ministries and Tabletalk, and serves as editor of Expositor magazine. Dustin and his wife Molli live in Porthcawl, Wales.

NATE PICKOWICZ is the pastor of Harvest Bible Church in Gilmanton Iron Works, New Hampshire. He is the author of Reviving New England and Why We’re Protestant. Additionally, he writes for TableTalk magazine and Reformanda Ministries, and serves as the editor of The American Puritans series. He and his wife, Jessica, and two children, Jack and Elizabeth.

Endorsements
“I am personally excited to see this excellent work, The American Puritans, written by two gifted authors and historians, Dustin Benge and Nate Pickowicz, appear in print. These men have made an important contribution to our understanding of the spiritual leaders who laid the theological and moral foundation for the early American colonies. Four centuries later, we continue to stand on the sturdy shoulders of these giants who first brought the Puritan way of life to American soil. This is a book containing nine concise biographies that I urge you to read. I believe it will both encourage and challenge you in your faith as you study these Puritans of the past.” — Steven J. Lawson, president, OnePassion Ministries and professor, The Master’s Seminary
“With clarity, wisdom, and infectious enthusiasm, Dustin Benge and Nate Pickowicz introduce us to nine inspiring heralds of Christ. The Puritans are a hoard of treasure for all who want spiritual riches, and this book throws open some bulging but hidden caskets. Read and be enriched!” — Michael Reeves, president, Union School of Theology
“The tale of nine American Puritans, each with distinctive personalities and backgrounds, is vividly portrayed with attention to fascinating details and is written with candor and care. There can be no doubt that their influence on the British colonies shaped the future direction of the United States. The tales sail through rough seas—the Salem ‘witch trials’ and the potentially legalist approach to assurance, to name but two. Dustin Benge and Nate Pickowicz, however, always have the measure of things, and this delightful book is fun to read and instructive to subsequently ponder over—a book to be enjoyed and savored. As they currently say in the land from which these Puritans came, this book is ‘a cracking good read.’” — Derek W. H. Thomas, senior minister of First Presbyterian Church, Columbia, South Carolina, and chancellor’s professor, Reformed Theological Seminary