Piercing Leviathan: God’s Defeat of Evil in the Book of Job

Piercing Leviathan: God\’s Defeat of Evil in the Book of Job
https://gospelebooks.net/removed/piercing-leviathan-gods-defeat-evil-book-job.html 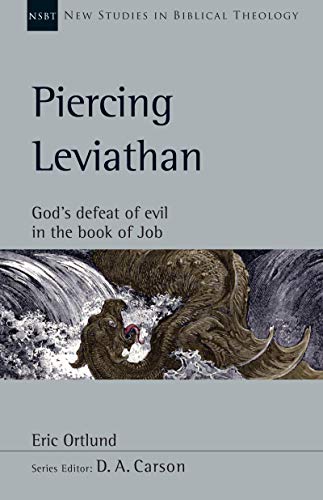 One of the most challenging passages in the Old Testament book of Job comes in the Lord’s second speech (40–41). The characters and the reader have waited a long time for the Lord to speak―only to read what is traditionally interpreted as a long description of a hippopotamus and crocodile (Behemoth and Leviathan). The stakes are very high: is God right to run the world in such a way that allows such terrible suffering for one of his most loyal servants? Is Job right to keep trusting God in the midst of much criticism? But it is difficult for modern readers to avoid a sense of frustrating anticlimax as the book ends.
Eric Ortlund argues that Behemoth and Leviathan are better understood as symbols of cosmic chaos and evil―that a supernatural interpretation fits better exegetically within the book of Job and within Job’s ancient Middle Eastern context. It also helps modern readers to appreciate the satisfying climax the narrator intended for the book: in describing Behemoth and Leviathan, God is directly engaging with Job’s complaint about divine justice, implying to Job that he understands the evil at loose in his creation better than Job does, is in control of it, and will one day destroy it.

In this New Studies in Biblical Theology volume, Ortlund considers different interpretations of the Lord’s second speech and their potential exegetical and pastoral weaknesses. He shows how a supernatural interpretation of Behemoth and Leviathan puts modern readers in a position to appreciate the reward of Job’s faith (and ours) as we endure in trusting God while living in an unredeemed creation.
Addressing key issues in biblical theology, the works comprising New Studies in Biblical Theology are creative attempts to help Christians better understand their Bibles. The NSBT series is edited by D. A. Carson, aiming to simultaneously instruct and to edify, to interact with current scholarship and to point the way ahead.

Eric OrtlundGod's Defeat of Evil in the Book of JobIVP AcademicPiercing Leviathan
Gospel eBooks is a participant in the Amazon Services LLC Associates Program, an affiliate advertising program designed to provide a means for sites to earn advertising fees by advertising and linking to amazon.com. View our Privacy Policy.