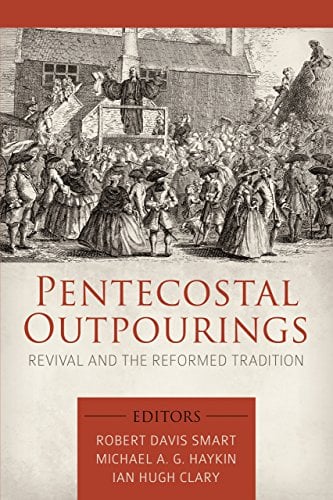 When Jesus ascended to heaven and sat down at the right hand of God the Father, He poured out His Holy Spirit at Pentecost. This significant historical and redemptive event was not the last time Christ poured out His Spirit in redemptive history. Mindful of these subsequent acts, ‘Pentecostal Outpourings’ presents historical research on revivals in the Reformed tradition during the eighteenth and nineteenth centuries. Investigating the British Isles, it observes the outpourings experienced among Welsh Calvinistic Methodists, Irish Dissenters, Calvinistic English Baptists, and Scottish Presbyterians. It then moves on to evaluate the revival instincts among Presbyterians, Congregationalists, Baptists, and the Dutch Reformed in America. May the knowledge of these outpourings of the Holy Spirit help us seek God earnestly to revive His Church once again.

Table of Contents:
Preface (Steve Lawson)
Introduction
I. Revival in the British Isles

Editors:
Michael A. G. Haykin is professor of church history and biblical spirituality at The Southern Baptist Theological Seminary in Louisville, Kentucky.

Robert Davis Smart is the senior minister of Christ Church in Bloomington, Illinois. He teaches part-time at different seminaries, preaches at conferences, and stays active in world missions. He and his wife, Karen, enjoy their five children and three grandchildren.

Ian Hugh Clary is a co-editor of The Pure Flame of Devotion: A History of Christian Spirituality. He and his wife, Vicky, have three children, Jack, Molly, and Kate, and live in Toronto where they are members of West Toronto Baptist Church.

Endorsement:
“Some in the contemporary Reformed world, in Britain at least, are wary of any talk of a revival, whether because of fear of Pentecostal and charismatic excesses or weariness of what is sometimes assumed to be a misty-eyed Celtic Romanticism. This volume provides conclusive proof that the notion of revival and a longing for the extraordinary working of God in the church has been at the heart of all that has been best in the Reformed tradition.” — David Ceri Jones, Reader in Welsh and Atlantic History, Aberystwyth University, Wales

Ian Hugh ClaryMichael A. G. HaykinNon FictionPentecostal OutpouringsReformation Heritage BooksRevival and the Reformed TraditionRobert Davis Smart
Gospel eBooks is a participant in the Amazon Services LLC Associates Program, an affiliate advertising program designed to provide a means for sites to earn advertising fees by advertising and linking to amazon.com. View our Privacy Policy.