Mr. Not Right for Her: Sweet Cowboy Romance with Texas-Sized Comedy

Mr. Not Right for Her: Sweet Cowboy Romance with Texas-Sized Comedy
https://gospelebooks.net/removed/mr-not-right-sweet-cowboy-romance-texas-sized-comedy.html 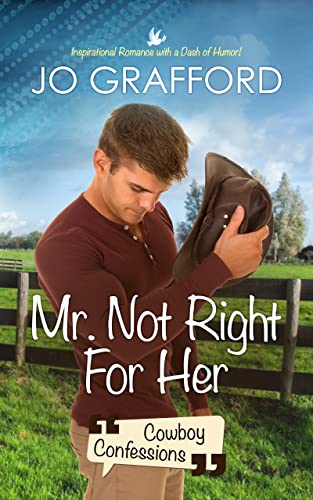 A single-and-proud-of-it cowboy with an interfering family determined to push him toward his happily-ever-after, whether he wants it or not!

Yeah, that sounds like a bad chick-flick in the making, even to Asher Cassidy. Too bad, y’all! Because he isn’t going to be ready for a big church wedding anytime soon…make that never. His girlfriend dropped him like a hot potato after a freak fire scarred the left side of his face. No way is he playing the game of broken hearts again.

He hires Bella Johnson as a ranch hand because she’s so desperate for money that she’ll have no choice but to put up with his crankiness, the dirtiest chores, and whatever else he happens to be in the mood to assign her. By some miracle, she even agrees to pose as his fake girlfriend at the big hoedown his well-meaning parents have in the works to introduce him to all the single ladies in town.

The only reason Bella actually agrees to accept his job offer is because she recognizes a broken heart when she sees one. She believes her unique skill set is exactly what this cocky, sarcastic cowboy needs right now on his ranch, though she isn’t nearly as confident about her ability to serve as his fake girlfriend — especially after discovering her feelings for him are becoming all too real.

A sweet and inspirational, small-town romance with a few Texas-sized detours into comedy!

JG PressJo GraffordMr. Not Right for HerSweet Cowboy Romance with Texas-Sized Comedy
Gospel eBooks is a participant in the Amazon Services LLC Associates Program, an affiliate advertising program designed to provide a means for sites to earn advertising fees by advertising and linking to amazon.com. View our Privacy Policy.