Mere Evangelism: 10 Insights From C.S. Lewis to Help You Share Your Faith

Mere Evangelism: 10 Insights From C.S. Lewis to Help You Share Your Faith
https://gospelebooks.net/removed/mere-evangelism-10-insights-c-s-lewis-help-share-faith.html 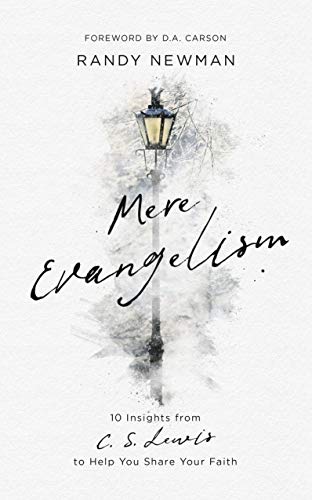 Let C.S. Lewis inspire and equip you to share your faith.

Evangelism is an extraordinary task; it’s what God uses to bring people from death to life. But it has always been difficult.

C.S. Lewis was used by God in the conversions of countless people, from friends and acquaintances in his own lifetime to modern-day readers of books such as The Chronicles of Narnia and Mere Christianity (the most influential Christian book of the 20th century). As Tim Keller comments, “C.S. Lewis was incredibly skilled at getting Christianity across in a way that’s powerful to thoughtful people.” So, if we want help with evangelism, there is much we can learn from the clarity and imagination of this hugely influential Christian writer.

You may feel inadequate to the task; after all, there is only one C.S. Lewis. But evangelist Randy Newman skillfully helps us to apply the methods Lewis used (storytelling, humour, imagery and more) in our own conversations.

You will be equipped to talk about your faith and engage with unbelievers wisely, whatever their attitude towards the Christian faith.

“This isn’t a book to increase membership in a C.S. Lewis fan club or prompt praise for him. It’s to strengthen our resolve to point lost people to the one who could deliver them from a realm where it’s ‘always winter but never Christmas.’ My prayer is that this book will help you say and do things that will make an eternal difference in many people’s lives.” From the introduction to Mere Evangelism by Randy Newman.

10 Insights From C.S. Lewis to Help You Share Your FaithMere EvangelismRandy NewmanThe Good Book Company
Gospel eBooks is a participant in the Amazon Services LLC Associates Program, an affiliate advertising program designed to provide a means for sites to earn advertising fees by advertising and linking to amazon.com. View our Privacy Policy.