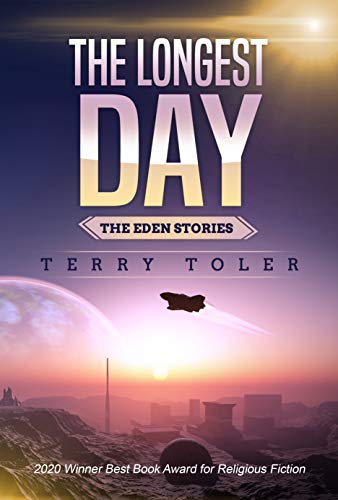 What would happen if an astronaut from Earth, a fallen and sinful man, discovered a planet where Adam and Eve had not eaten from the tree of the knowledge of good and evil?

Adam Lang, a self-professed atheist, travels to the ends of the universe to discover intelligent life on the only perfect planet left, Adon. There he discovered something he least expected to find . . . God.

“Best-selling author, Terry Toler is a well-written, rising star in literary fiction, with his epic fantasy story, The Longest Day, the first in The Eden Stories series and the one that started the franchise.” Michael DeAngelo reviewer

As much as it is about a strange journey across the stars, it’s also about people, and consequences, both of which are captured in page turning suspense.

The Longest Day is one man’s story of romance, loss, science, discovery, mystery, sin, and salvation.

What Others Are Saying:

“Groundbreaking . . .”
“Epic.”
“Highly complex characters and a stunning conclusion.”
“The best fantasy series since Left Behind.”

Toler draws his readers in and makes sure that they’re settled in, because he knows it’s going to be a long ride and they aren’t going to want to miss a thing. Best of all, there are more Eden Stories coming as he tells us what happened on each of the planets in our solar system through suspenseful, thrilling stories.

What if every planet in our solar system once had life, a Garden of Eden, an Adam and an Eve, and a tree of the knowledge of good and evil? What might’ve happened on those planets to cause them to destroy themselves? Will earth suffer the same fate?

Other Books in The Eden Stories

The Reformation of Mars
The Late, Great Planet Jupiter
The Great Wall of Ven-Us
Saturn: The Eden Experiment
The Mercury Protocols