The Jesus Music: A Visual Story of Redemption as Told by Those Who Lived It

The Jesus Music: A Visual Story of Redemption as Told by Those Who Lived It
https://gospelebooks.net/removed/jesus-music-visual-story-redemption-told-lived.html 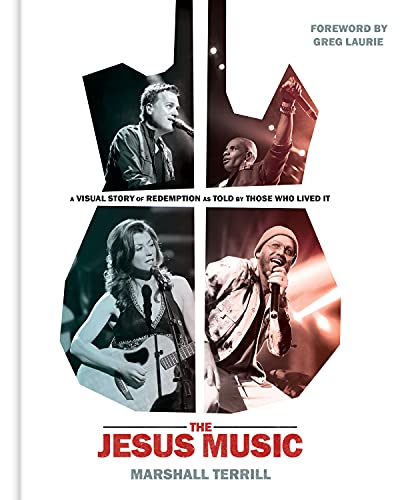 A written and visual complement to the documentary film of the same name, The Jesus Music brings the history of a movement to life. Featuring Contemporary Christian Music artists across five decades, readers will experience the story that has united and changed the lives of people around the world.

The Jesus Music: A Visual Story of Redemption as Told by Those Who Lived It shares that story: people creating something they wanted, something that never existed before. Written by music and film historian Marshall Terrill, the book accompanies a documentary film by award-winning directors Jon and Andy Erwin; this written and visual narrative of the genre features historic concerts and candid behind-the-scenes photographs throughout.

The Jesus Music explores the history, evolution, and redemptive thread of Contemporary Christian music over the last fifty years as it spans the convergence of rock and roll, country, and gospel music. As CCM grows, readers will see California artists as much a part of hippie culture as Christian culture, religious-focused bands and songs denounced by some church leaders of the day, and best-selling artists who rose, and sometimes fell from fame, as they journey through the music and experience the often delicate balances between faith, fame, mission, and humanity as they relate to Christian music.

A Visual Story of Redemption as Told by Those Who Lived ItK-LoveMarshall TerrillThe Jesus Music
Gospel eBooks is a participant in the Amazon Services LLC Associates Program, an affiliate advertising program designed to provide a means for sites to earn advertising fees by advertising and linking to amazon.com. View our Privacy Policy.