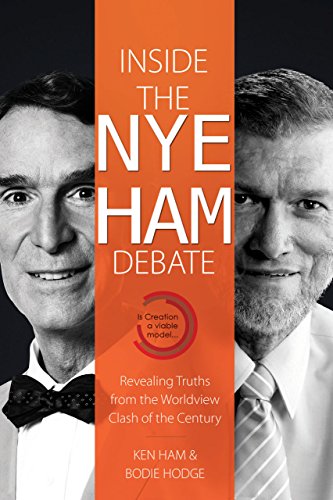 The debate to determine whether or not creation is a viable origins model in today’s modern scientific era!

– Includes a full transcript of the live debate telecast
– In-depth information has been developed to clarify and build your faith
– Go behind the scenes and beyond the event to get even more details on the topics discussed!

With millions watching this live debate on February 4, 2014, “Bill Nye, the Science Guy” squared off with Answers in Genesis founder and president Ken Ham. This event echoed the worldviews at work in our lives today and put two of the most unique and recognizable advocates of their positions on the same stage to face not only each other, but the many who watched. More answers, more perspectives, more truth to answer the world’s most critical question: How did we and all we know come to be here, at this place and this time in the history of the universe? Are we accidental products of evolution or the centerpiece of God’s marvelous creation?

3.5 million have watched the debate on YouTube. This does not include any that watched it live. This is all after the debate. It is also aired on Daystar many times throughout the year.

– Over 3.8 Million streams to the debate live
– 7.6 Million people watched (based on an extremely conservative estimate of 2 viewers per stream, or 11.4 Million based on 3 people per stream)

Bodie HodgeInside the Nye/Ham DebateKen HamMaster Books
Gospel eBooks is a participant in the Amazon Services LLC Associates Program, an affiliate advertising program designed to provide a means for sites to earn advertising fees by advertising and linking to amazon.com. View our Privacy Policy.