The Great Wall of Venu-Us 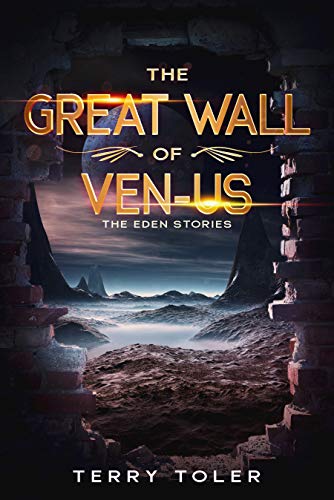 Book Four of The Award-Winning Series The Eden Stories
IS FORGIVENESS REALLY POSSIBLE?

That’s what this deeply moving book explores. In the ancient days of Ven-Us, a mother steals the birthright from her husband’s mistress. What ensues are generations of endless wars between the descendants of the two half-brothers. A great wall is built to divide the Naryans from the Christians.

Thousands of years later, the wife and daughter of Row Church-well, the head of the theological seminary, were murdered by a Naryan named Qary. Row learns that Qary has found the original site of the Garden of Eden and intends to launch missiles across the wall to kill every Christian on the other side. Row must find the site before it’s too late.

When he comes face-to-face with Qary, will he exact revenge or can Row bring himself to forgive and prevent the mutual destruction that will result if he kills his mortal enemy?

PRAISE FOR THE GREAT WALL OF VEN-US

“This story had me on pins and needles.”
“Captured me from the first chapter.”
“The book left us with something important―a feeling that we were there and witnessed something great!”

Terry TolerThe Great Wall of Venu-Us
Gospel eBooks is a participant in the Amazon Services LLC Associates Program, an affiliate advertising program designed to provide a means for sites to earn advertising fees by advertising and linking to amazon.com. View our Privacy Policy.