God & Spies: Based On A True Story Top Secret Operation 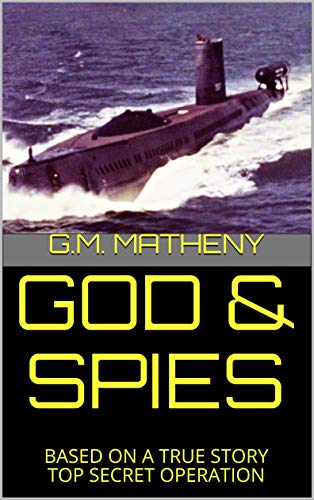 GOD & SPIES: Based on a True Story. Author GM Matheny was a US Navy saturation diver on the nuclear submarine USS Halibut, involved in Operation Ivy Bells. America’s most important and most dangerous of the Cold War clandestine operations. If you like espionage, diving, adventure, history, and good old-fashioned American bravado, you will enjoy this book.
GOD & SPIES is a firsthand account of America’s greatest intelligence coup! Operation Ivy Bells was not an onetime intercept of foreign intelligence but an ongoing operation of multiple Soviet military channels. Another reason for the high interest in our operation was the audacious nature in which it was done—with not one person risking his neck but the crews of two US Navy nuclear submarines which rendezvoused in Soviet territorial waters.
“How did I end up as a navy diver, four hundred feet down in a frigid Siberian sea? After making my dad totally upset, I set out to make him happy. ‘Honor thy father’ – I struggled with a decision to serve God. ‘Lord, I will give my life to you and serve you if you let me make this dive.’ But I had the impression God only wanted to know one thing: ‘What if I do not let you? Will you serve me anyway?’”

Based On A True Story Top Secret OperationG.M. MathenyGOD & SPIESNon Fiction
Gospel eBooks is a participant in the Amazon Services LLC Associates Program, an affiliate advertising program designed to provide a means for sites to earn advertising fees by advertising and linking to amazon.com. View our Privacy Policy.