Out of a Far Country: A Gay Son’s Journey to God. A Broken Mother’s Search for Hope.

Out of a Far Country: A Gay Son\’s Journey to God. A Broken Mother\’s Search for Hope.
https://gospelebooks.net/removed/far-country-gay-sons-journey-god-broken-mothers-search-hope.html 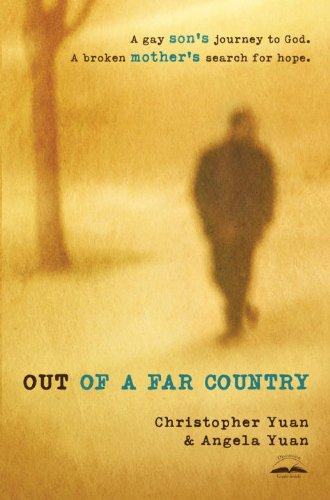 Coming Out, Then Coming Home

Christopher Yuan, the son of Chinese immigrants, discovered at an early age that he was different. He was attracted to other boys. As he grew into adulthood, his mother, Angela, hoped to control the situation. Instead, she found that her son and her life were spiraling out of control—and her own personal demons were determined to defeat her.

Years of heartbreak, confusion, and prayer followed before the Yuans found a place of complete surrender, which is God’s desire for all families. Their amazing story, told from the perspectives of both mother and son, offers hope for anyone affected by homosexuality.

God calls all who are lost to come home to him. Casting a compelling vision for holy sexuality, Out of a Far Country speaks to prodigals, parents of prodigals, and those wanting to minister to the gay community.

“But while he was still a long way off, his father saw him and felt compassion, and ran and embraced him and kissed him.” – Luke 15:20

Includes a discussion guide for personal reflection and group use.

A Gay Son's Journey to God. A Broken Mother's Search for Hope.Angela YuanChristopher YuanOut of a Far CountryWaterbrook Press
Gospel eBooks is a participant in the Amazon Services LLC Associates Program, an affiliate advertising program designed to provide a means for sites to earn advertising fees by advertising and linking to amazon.com. View our Privacy Policy.