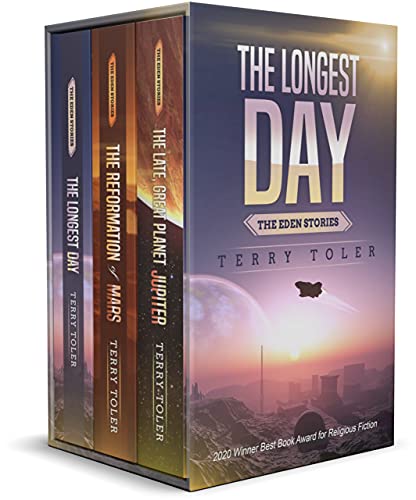 What if there has been more than one Garden of Eden?

What if every planet in our solar system has had intelligent life, an Adam and an Eve, and a tree of the knowledge of good and evil?

Nine planets. Nine garden of Edens. Nine Adam and Eve. Nine trees of the knowledge of good and evil.

Would they all eat the fruit? Is that why the other eight planets are desolate?

That’s what The Eden Stories explores in this ultimate Fantasy and Suspense series. Filled with biblical truths. Ripped from yesterday and today’s headlines. You won’t want to put them down until you devour every word. A great read for believers and seekers.

Here’s what others are saying:

“Fans of C.S. Lewis will love this series.”
“The best Christian fantasy series since Left Behind.”
“They make you think long and hard about where we might be headed as a civilization.”

Book One: The Longest Day (Winner of 2020 Best Book Award for Religious Fiction)

Adam Lang, an astronaut from earth, a self-professed atheist, is tasked with traveling to the ends of the universe in search of intelligent life. He finds what he least expects to find . . . God. When he lands on the planet Adon, he discovers a planet where Adam and Eve had not eaten of the tree of the knowledge of good evil. What will happen to the perfect world when he’s tempted to eat the fruit?

This book started the Jamie Austen Spy Thriller franchise. Jamie is Alex’s daughter. He’s been searching for her. He didn’t know she’s been searching for him. She knows where he is. Alex is at Cape Canaveral. His spacecraft leaves in six hours. It’s a race against time. There’s also a terrorist to deal with. Who is intend on blowing up the spaceship and killing hundreds of thousands of observers.

Will Jamie save them? The Jamie Austen Thrillers have been #1 In ten different countries.

Book Two: The Reformation of Mars

A young girl finds favor with the Lord. She discovers a copy of a Bible in the basement of her father’s printing shop. Bible’s are banned on Mars. The official teaching of the church is that Eve ate the apple, but Adam didn’t. Justification for the oppression of women. The young girl, Abbey, posts a thesis on the door of the church under the name, Martian Luther, with text from the actual Bible proving the lies the state church has been teaching for centuries. Her life is in grave danger as it’s a race against time to get the truth to the masses.

The rapture comes to Jupiter. Ten billion people are missing. A pastor’s daughter, Danni Howell, is left behind. As is Mrs. Pinkerton, a long-time member of her father’s church. What follows is a gut-wrenching tale of survival as they are the last best great hope for Jupiter as they battle the authorities who want to kill them, plagues, natural disasters, and the coming of the antichrist.

Terry Toler is the author of seventeen non-fiction books and twenty-three novels including The Eden Stories and the Jamie Austen Spy Thrillers. His books have reached number one in ten different countries and he’s won three awards for writing.