Why Should the Devil Have All the Good Music?: Larry Norman and the Perils of Christian Rock

Why Should the Devil Have All the Good Music?: Larry Norman and the Perils of Christian Rock
https://gospelebooks.net/removed/devil-good-music-larry-norman-perils-christian-rock.html 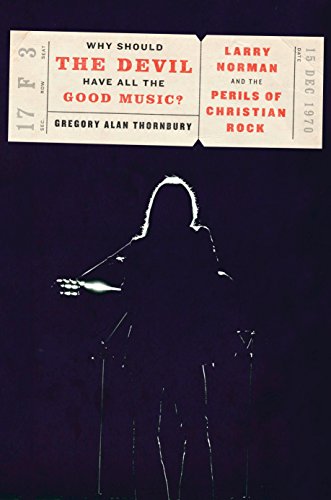 The riveting, untold story of the “Father of Christian Rock” and the conflicts that launched a billion-dollar industry at the dawn of America’s culture wars.

In 1969, in Capitol Records’ Hollywood studio, a blonde-haired troubadour named Larry Norman laid track for an album that would launch a new genre of music and one of the strangest, most interesting careers in modern rock. Having spent the bulk of the 1960s playing on bills with acts like the Who, Janis Joplin, and the Doors, Norman decided that he wanted to sing about the most countercultural subject of all: Jesus.

Billboard called Norman “the most important songwriter since Paul Simon,” and his music would go on to inspire members of bands as diverse as U2, The Pixies, Guns ‘N Roses, and more. To a young generation of Christians who wanted a way to be different in the American cultural scene, Larry was a godsend—spinning songs about one’s eternal soul as deftly as he did ones critiquing consumerism, middle-class values, and the Vietnam War. To the religious establishment, however, he was a thorn in the side; and to secular music fans, he was an enigma, constantly offering up Jesus to problems they didn’t think were problems. Paul McCartney himself once told Larry, “You could be famous if you’d just drop the God stuff,” a statement that would foreshadow Norman’s ultimate demise.

In Why Should the Devil Have all the Good Music?, Gregory Alan Thornbury draws on unparalleled access to Norman’s personal papers and archives to narrate the conflicts that defined the singer’s life, as he crisscrossed the developing fault lines between Evangelicals and mainstream American culture—friction that continues to this day. What emerges is a twisting, engrossing story about ambition, art, friendship, betrayal, and the turns one’s life can take when you believe God is on your side.

Gregory Alan ThornburyLarry Norman and the Perils of Christian RockWestminster John Knox PressWhy Should the Devil Have All the Good Music?
Gospel eBooks is a participant in the Amazon Services LLC Associates Program, an affiliate advertising program designed to provide a means for sites to earn advertising fees by advertising and linking to amazon.com. View our Privacy Policy.