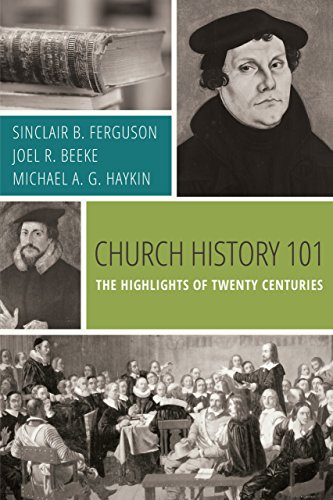 Church history is important because it shows us how God’s faithful dealings with His people in the Bible continue in the ongoing life and work of Christ in our world. If you have ever wished for a short book highlighting church history’s most important events that will enlighten your mind and pique your interest, this is the one you’ve been waiting for. Three prolific church historians collaborate their efforts in Church History 101 to present you with a quick read of church history’s high points.

Authors:
Sinclair B. Ferguson is a teaching fellow of Ligonier Ministries.

Endorsement:
“The story of the growth of God’s kingdom is thrilling in all its aspects, and to have this brief summary available in book form will surely aid us in the assurance that absolutely nothing can prevent King Jesus from fulfilling His purpose in building His church. Thrilling to read.” — Derek W. H. Thomas, Senior Minister, First Presbyterian Church, Columbia, South Carolina; Robert Strong Professor of Systematic and Pastoral Theology, RTS Atlanta; and Teaching Fellow of Ligonier Ministries

Joel R. BeekeMichael A. G. HaykinReformation Heritage BooksSinclair B. Ferguson
Gospel eBooks is a participant in the Amazon Services LLC Associates Program, an affiliate advertising program designed to provide a means for sites to earn advertising fees by advertising and linking to amazon.com. View our Privacy Policy.