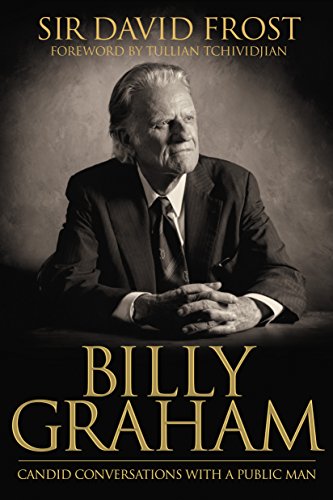 Most people know Billy Graham the preacher.Many know Billy Graham the author.In this remarkable book, Graham reveals a personal side that few have seen before. For thirty years, Billy Graham and David Frost fascinated television audiences with their conversations about God, the Bible, and Graham’s decades-long ministry. Frost asked the questions that thousands of viewers wanted to ask. Graham answered them with authenticity and grace. Along the way, Graham provided insight into life as an evangelist, a Christian father and grandfather, and a public figure in a changing culture. Most of all, Graham’s words show what it means to live out your beliefs—whether you speak to millions of people around the world or simply want to live faithfully at home and work. With a chronology of Graham’s life, a preface from Frost, and a foreword from his grandson, Tullian Tchividjian, this weaving of stories, interviews, and reflections will inspire you to respond to God’s call with no reserve.

Sir David Frost, who died in 2013, was an English journalist, comedian, and television host. Known for his history-making interviews with top political figures, Frost is the author of several books, including his autobiography. His famous interviews with Richard Nixon formed the basis for the Oscar-nominated film Frost/Nixon.

Billy GrahamCandid Conversations with a Public ManDavid C CookSir David Frost
Gospel eBooks is a participant in the Amazon Services LLC Associates Program, an affiliate advertising program designed to provide a means for sites to earn advertising fees by advertising and linking to amazon.com. View our Privacy Policy.