Secrets – Never Heard Until Now – of the Book of Revelation

Secrets – Never Heard Until Now – of the Book of Revelation
https://gospelebooks.net/christian-ebook-deals/secrets-never-heard-now-book-revelation.html 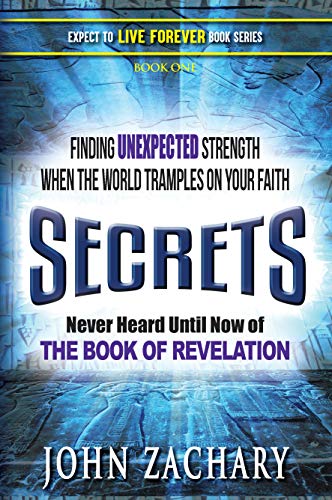 Are players depicted in the book of Revelation out in force today?

Discover apocalyptic answers to this question in Secrets – never heard until now of the book of Revelation!

John Zachary, Spirit-filled Christian, writes of his spiritual memoir in Secrets of the Book of Revelation. However, Secrets is only the first bite in a delectable banquet of biblical truth. Read the Expect to Live Forever book series as it reveals evidence that solves many issues facing Christians in the 21st century. For example, seventy percent of Christian youth going to college lose their faith. Are you personally ready to discover answers that will stop the downward spiral of the church?

Upon reading this book I am excited to share this information with my high school and college student family members. So much of what students encounter these days is meant to attack the validity of Christianity. Here is a book that uses logic, science and mathematical computation to reveal that the prophecies of the Old Testament are accurate and prove that God is eternal, that He created us and the Earth, and He knows what will happen down to the last details and dates. Do not miss the opportunity to read this fascinating and informative book series!

…a detailed and trustworthy examination of how a rational person can become convinced of the truth of God’s existence based on God intervening in the physical world to make events happen. The detailed look at prophecy makes a convincing case that it takes more faith to be an atheist than to believe that a real God can impact the real world in the ways described. Exciting ideas worth considering by any intellectually curious person!

The Expect to Live Forever book series avoids sensationalism and contains no speculation related to when Christ will appear. However, you will get a rock-solid view of the future based on the synoptic gospels in their relationship to the books of Daniel and Revelation. If you want reliable answers from the Bible backed up with logic, historical evidence, and the exact science of astronomy, you will enjoy every book in the Expect to Live Forever book series.

Book #1: Secrets – never heard until now – of the book of Revelation

Book #2: Eternal Life – Why you should expect to live forever

Book #3: Beyond – The Coming Prince by Sir Robert Anderson

Book #4: The Search for Extraterrestrial Intelligence – of the spiritual kind

In the Expect to Live Forever book series, you’ll discover:

– A scientific, logical, and biblical method that validates Jesus is Lord

– That foretold specific events happened on exact dates, centuries into the future. This validates that only the biblical prophets received texts from a Being that transcends time and space

– How to defend your Christian faith against all other belief systems

The Expect to Live Forever book series is your resource for tying faith to fact. If you like an objective exploration of Biblical miracles, the unveiling of otherworldly research, personal examples of heightened understanding, then you will enjoy John Zachary’s inspiring conclusions.

Buy Secrets – never heard until now – of the Book of Revelation today to begin your journey into a heightened awareness of the Bible, how it impacts your life today, enhances your Christian worldview, proves that everyone is priceless, and that God loves you.

Harvard HouseJohn ZacharyNon FictionSecrets - Never Heard Until Now - of the Book of Revelation
Gospel eBooks is a participant in the Amazon Services LLC Associates Program, an affiliate advertising program designed to provide a means for sites to earn advertising fees by advertising and linking to amazon.com. View our Privacy Policy.