In this grab bag we have 40 e-books from HarperCollins Christian Publishing. The prices and sale dates that the publisher has provided are under each ebook cover. 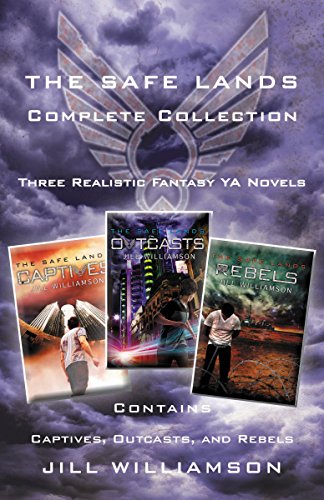 In The Safe Lands Complete Collection by bestselling author Jill Williamson, brothers Levi, Mason, and Omar find their entire lives changed after they are made to live behind the Safe Lands’ walls. Each must navigate the challenges before them, and somehow rescue the loved ones who remain alive.

Captives: In a dystopian future, most of the population is infected with a plague, with the exception of those who live outside the Safe Land’s city walls. When a plague mutation sends city enforcers looking for the uninfected, the village of Glenrock is raided. After all the women—including Levi’s fiancée—are captured, along with Mason and Omar, Levi vows to rescue them even if it means breaking into a land that is anything but safe. What Levi doesn’t realize is that Omar knew about the raid—as well as the plans Safe Lands has for the women they’ve captured.

Outcasts: In book two, Levi finds himself not only the leader of the remaining people from Glenrock, but also the head of a new rebel force called the Messengers, which intends to expose the Safe Lands’ lies. At the same time, Mason uncovers secrets that may be more dangerous than he ever imagined. Meanwhile, Omar decides to take matters into his own hands.

Rebels: In the final novel in the Safe Lands series, Mason and Omar are sentenced to Liberation, while Levi must find a way to lead the growing rebellion on his own. But everything comes to a head when Levi’s now-wife, Jemma, becomes a pawn in the Safe Lands’ game.