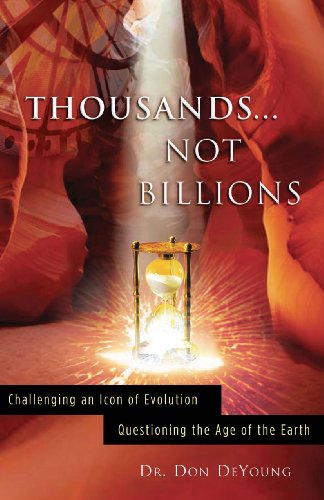 These and many other questions are addressed in Thousands…Not Billions. This book summarizes eight years of research by the Institute for Creation Research (ICR) and a team of scientists, whose goal was to explore the age of the earth from a biblical perspective. The project title was Radioisotopes and the Age of The Earth, or RATE.
The age of the earth is one of the most divisive topics today, much debated by scholars and laypersons alike. What one believes about the age of the earth goes a long way in determining world views. The Bible is explicit that the earth is young, but many people feel that science has proved our planet is more than four billion year old. Thousands…Not Billions provides a compelling challenge to Darwinian evolution.

Don DeYoungMaster BooksNon FictionThousands...Not Billions
Gospel eBooks is a participant in the Amazon Services LLC Associates Program, an affiliate advertising program designed to provide a means for sites to earn advertising fees by advertising and linking to amazon.com. View our Privacy Policy.