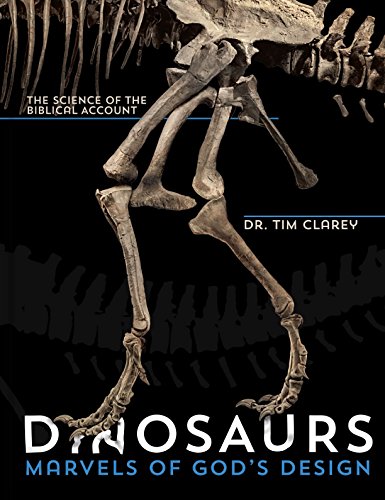 This book fills a critical need for sound science about dinosaurs from a biblical viewpoint, focusing on the five major dinosaur groups. Dinosaurs are in the news every day, as well as viewed in museums and on science channels. Unfortunately, these portrayals always push an evolutionary agenda. This book counters those arguments with solid, accurate, and biblically-based science:

– Explains the latest findings in dinosaur biology, behavior, extinction, and more
– Covers the complete spectrum of dinosaur-related topics, from the earliest dinosaur discoveries to debate over why they went extinct
– Provides a visually stunning, dynamic exploration into the history of dinosaurs through the most current discoveries few have seen before!

Because of secular books and television shows, many Christians have struggled to explain how dinosaurs fit in the biblical timeline. The word “dinosaur” is not found in the Bible, which has caused some well-meaning Christians to turn to secular science for explanations, including more speculation than actual fact. Unfortunately, this misdirection has caused many people to lose faith in the Bible, especially the young generation. This book will restore faith in the Word of God as it connects the Bible with science. Read and discover how dinosaurs are part of God’s creative glory!

DinosaursMarvels of God's DesignMaster BooksTim Clarey
Gospel eBooks is a participant in the Amazon Services LLC Associates Program, an affiliate advertising program designed to provide a means for sites to earn advertising fees by advertising and linking to amazon.com. View our Privacy Policy.