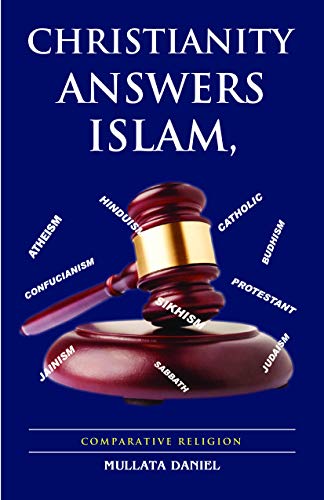 The coming of this book, Christianity Answers Islam, is a fulfillment of a Biblical prophecy by the prophet Isaiah herein revealed.
What started as an ordinary challenge by Muslim friends to a Catholic workmate in the military to convert to Islam turns into a great search for the true religion between Islam and Christianity that later leads to investigation of all the major religions of the world for their truthfulness. The search for the true religion through the Quran leads Mullata Daniel back into Christianity with a new vigour, after reading the Quran three times over, discovering the merits of Christianity through the Quran of Islam. Today, he confidently says “The Quran made me Christian” as he narrates his story. Though majoring on the two major religions which are Christianity and Islam, Christianity Answers Islam is eventually about all religions. It provides the best opportunity for Christians to understand Islam and Muslims to understand Christianity and for those seeking to know which religion is true and are confused between the diverse opinions of the many religions to find clear answers. Probably the first book ever written to prove all religions for their truthfulness or the lack of it. It is here to answer many pertinent questions about religions; – questions here-to-fore dreaded and avoided by humanity and accepted as questions without answers. Can humans ever agree on the right religion? Is there a way to know what is true and what is not true in religions besides everyone defending his own? Are all human beings created by the same God after all and will they all face a common situation after death? Judging from the diversity of their beliefs, it SEEMS Muslims are created by Allah and will be answerable to Allah according to his rules, it seems Christians are created by Jehovah and will be answerable to Him according to His rules, the Hinduism followers are created by Brahma and will be answerable to him while still, the Atheists were created by no one and will be answerable to no one and will vanish into nothingness after death, they alone. Could this be true at all? No! The way all human beings have a lot in common only means they have a common origin and certainly a common destiny beyond the grave. After all, why do we have so many religions in our world today? It is simple. It’s because we had many religious founders in our past generations. Each religious founder or group of founders brought his/their unique ideologies which are now the diverse religions and each of them worked hard to get more followers to their ideologies and now the believers of each ideology giving birth to their children and teaching the same to their offspring. Today, many adherents of the diverse religions are those who found themselves in those religions by coincidence of the faith of their parents and not personal choice in the first place. The religious founders brought a lot of contradicting ideas which all can’t be true. Among them, who told us the truth, and who lied to us about God? Religion is a matter of life and death because our eternity depends on what we believe today.
Christianity answers Islam provides answers to:
•Does God exist?
•Is Jesus God?
•Is Muhammad a prophet?
•Is God a Trinity?
•Quran or Bible, which is the word of God?
•Creation or evolution, what is the merit of science in religion?
•Will we reincarnate or wait for judgement after death?
•Catholic or protestant, which is true Christianity?
•Saturday or Sunday, which is the right day of worship?
With these questions answered from the scriptures in this new release, Christianity Answers Islam is likely to become the next frontier of the religious debates.

Christianity Answers IslamComparative ReligionDaniel MullataNon Fiction
Gospel eBooks is a participant in the Amazon Services LLC Associates Program, an affiliate advertising program designed to provide a means for sites to earn advertising fees by advertising and linking to amazon.com. View our Privacy Policy.