Christ and His Threefold Office

Christ and His Threefold Office
https://gospelebooks.net/removed/christ-threefold-office.html 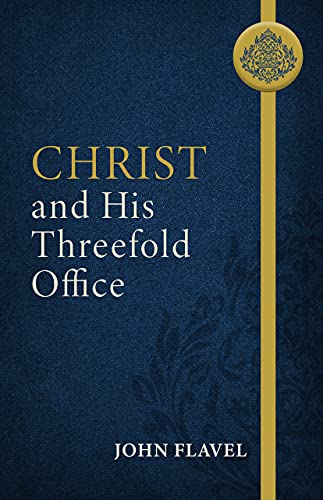 Flavel explores the glory of Christ becoming a man “to qualify and prepare Him for a full discharge of His mediatorship, in the office of our Prophet, Priest, and King.”

Flavel’s treatment of the subject is polemical when necessary and painstakingly detailed when he believes the truth is at stake. It is an act of adoration, of meditations upon “the transcendent excellency of Jesus Christ.”

John Flavel (1628–1691) was an English Puritan who became a non-conformist after the ‘Great Ejection’ of 1662. It was 10 years before he was licenced to preach again, and then only in his own home. His writings, when collected in the 19th century, filled 6 volumes. Flavel’s writings are known for their practical nature. He was instrumental in promoting the ‘Happy Union’ of Presbyterians and Congregationalists.

“It’s difficult to find a more compelling, heart-searching, affection-producing, and biblically sound expositor of experiential Christianity than the seventeenth-century English Puritan John Flavel. Combining pastoral warmth and theological depth, Flavel sought to display the loveliness of Christ as Mediator so that the believer might grow in greater spiritual maturity and conformity to Him. I cannot commend Flavel highly enough!” — Brian H. Cosby, senior minister of Wayside Presbyterian Church, Signal Mountain, Tennessee; and author of John Flavel: Puritan Life and Thought in Stuart England and Suffering and Sovereignty: John Flavel and the Puritans on Afflictive Providence

Christ and His Threefold OfficeJohn FlavelReformation Heritage Books
Gospel eBooks is a participant in the Amazon Services LLC Associates Program, an affiliate advertising program designed to provide a means for sites to earn advertising fees by advertising and linking to amazon.com. View our Privacy Policy.