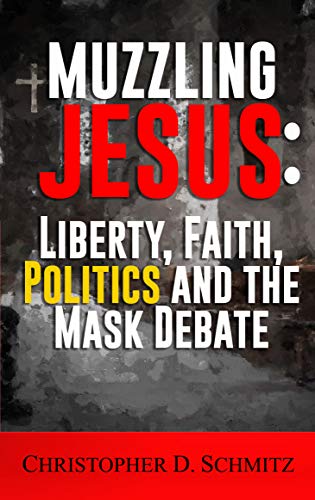 Would Jesus wear a mask?
In a crazy era where Christians make such little sense and science makes even less, thinking critically is vitally important. Culture would rather win arguments and assimilate followers than find the truth.

The world has lost its collective mind over how to best act and serve human interests during this season of pandemic. Nobody asks “should we steal people’s liberty?” Instead, they ask “how much freedom is too much to lose?” Logical fallacies are lobbed like grenades from every side and the goal posts move every week; my own son very nearly died because of it.

This book is far more libertarian than partisan in nature. It may challenge you to question everything and asks more questions than it answers.

Is there cause for a religious exemption to forced mask mandates?
What role does liberty play in faith…
…how should that affect our politics?

Christopher D SchmitzLiberty Faith Politics and the Mask DebateMuzzling JesusTreeShaker Books
Gospel eBooks is a participant in the Amazon Services LLC Associates Program, an affiliate advertising program designed to provide a means for sites to earn advertising fees by advertising and linking to amazon.com. View our Privacy Policy.