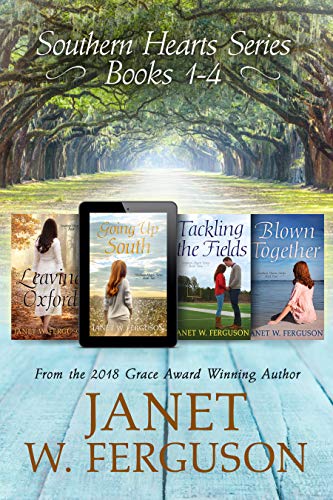 Get all four eBooks in this compelling Christian romance series!
With over 600 reviews on Amazon, get four full-length novels at a substantial discount over their individual prices!
Book 1 Leaving Oxford
Escaping home to Oxford, Mississippi, seemed like a good idea. Until it wasn’t.

A year after a tragic accident in Los Angeles flipped her world upside down, advertising guru Sarah Beth LeClair is still hiding away in her charming hometown of Oxford, Mississippi. And she may well be stuck there forever. Suffering from panic attacks, she prays for healing. Instead, her answer comes in the form of an arrogant football coach and an ugly puppy.

Former celebrity college quarterback Jess McCoy dreamed of playing pro football. One freak hit destroyed his chances. Although he enjoys his work as the university’s offensive coordinator, his aspirations have shifted to coaching at the highest level. His plans of moving up are finally coming together—until he falls for a woman who won’t leave town.

As the deadline for Jess’s decision on his dream career looms, the bars around Sarah Beth’s heart only grow stronger. But it’s time to make a decision about leaving Oxford.
Book 2 Going Up South
No one told him he had a son.

Actor Dylan Conner is furious. Not only has he been left out of his child’s life, the baby boy has been given another man’s last name. Determined to be a better father than the sorry guy who’d left him and his mother, Dylan fights to ensure a significant place in his son’s life. Unfortunately, his bad-boy reputation overshadows his good intentions. Only one woman in this small town sees beyond his Hollywood image. And he’s falling for her. Too bad she’s the custody mediator.

After her scandalous divorce in the small town of Oxford, Mississippi, attorney Cassie Brooks has no intentions of practicing law again. The humiliating experience left a bitter taste for love, marriage, and her profession.

Now friends need Cassie’s help in a custody negotiation, and her role demands she remain objective. She never expected to be drawn to Dylan Conner—the actor who everyone warns is bad news. Not only is the mediation at stake, but so is her heart.
Book 3 Tackling the Fields
Cole Sanders is a changed man. The university quarterback questions his direction in life after serving on a mission trip in Honduras. Things that used to fill Cole’s ego seem empty after witnessing the developing country’s extreme poverty and the death of a precious child. The one glimmer of hope through his confusion is the fresh perspective he now has about his tutor, Audrey. She possesses something beautiful inside and out—something that might help him become the person he wants to be.

University senior Audrey Vaughn tutored Cole Sanders for an entire year and never imagined the popular quarterback would see her as anything more than a friend. After partnering with him on the mission trip, they are drawn together. And he appears to have changed for the better. To let Cole into her life, Audrey will have to overcome not only her brother’s distrust, but also the paralyzing fear still lingering from a past she’s tried to leave behind.

Cole can’t walk away from Audrey now that they’re back in Oxford. He’ll have to figure out how to keep her giant of a brother, a lineman on his football team, from killing him when the coach has his back turned. But can Audrey trust her heart to a player so similar to the one who stole so much from her in the past?
Book 4 Blown Together
When love storms in…
Wealth manager Sam Conrad is accustomed to his domineering father ordering him around, especially at the bank where they both work. But when his father demands that Sam manage the inheritance of his bossy ex-fiancée, Sam has finally had enough. He leaves in search of a new life, and attorney Big Roy Bosarge from Mobile, Alabama, agrees to mentor Sam on his quest for direction. Sam didn’t expect to be thrown together with Roy’s eccentric daughter.