Kierkegaard as a Christian Thinker (2 books) 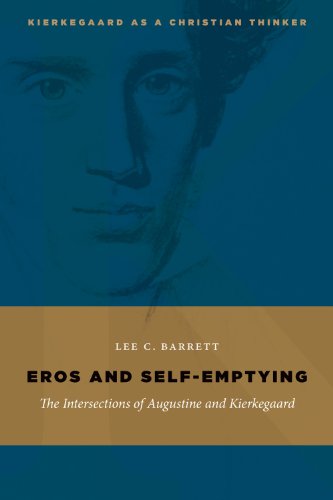 In this book — the first volume in the Kierkegaard as a Christian Thinker series — Lee Barrett offers a novel comparative interpretation of early church father Augustine and nineteenth-century philosopher-theologian Soren Kierkegaard.

Though these two intellectual giants have been paired by historians of Western culture, the exact nature of their similarities and differences has never before been probed in detail. Barrett demonstrates that on many essential theological levels Augustine and Kierkegaard were more convergent than divergent. Most significantly, their parallels point to a distinctive understanding of the Christian life as a passion for self-giving love.

Approaching Kierkegaard through the lens of Augustine, Barrett argues, enables the theme of desire for fulfillment in God to be seen as much more central to Kierkegaard’s thought than previously imagined.

In this book renowned philosopher Merold Westphal unpacks the writings of nineteenth-century thinker Søren Kierkegaard on biblical, Christian faith and its relation to reason.

Across five books — Fear and Trembling, Philosophical Fragments, Concluding Unscientific Postscript, Sickness Unto Death, and Practice in Christianity — and three pseudonyms, Kierkegaard sought to articulate a biblical concept of faith by approaching it from a variety of perspectives in relation to one another. Westphal offers a careful textual reading of these major discussions to present an overarching analysis of Kierkegaard’s conception of the true meaning of biblical faith.

Though Kierkegaard presents a complex picture of faith through his pseudonyms, Westphal argues that his perspective is a faithful and illuminating one, making claims that are important for philosophy of religion, for theology, and most of all for Christian life as it might be lived by faithful people.

Eros and Self-EmptyingKierkegaard as a Christian ThinkerKierkegaard's Concept of FaithLee C. BarrettMerold Westphal
Gospel eBooks is a participant in the Amazon Services LLC Associates Program, an affiliate advertising program designed to provide a means for sites to earn advertising fees by advertising and linking to amazon.com. View our Privacy Policy.